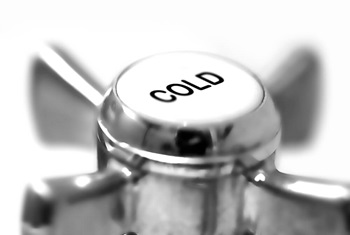 In part one, we learned about the potential benefits of hot showers. But what about a nice cold shower? Are there benefits to turning down the temperature?

We don’t hear as much about cold showers. They aren’t nearly as popular or inviting, so these benefits might come as more of a surprise.

You know how frostbite tends to take away fingers and toes from those who spend way too much time in the bitter cold? That’s because the body directs blood flow to vital organs (and away from less necessary and more distant body parts). While a cold shower won’t result in frostbite, it will teach your body to circulate blood more efficiently.

Instead of stripping the natural oils and drying out your skin and hair, cold water tightens pores, which can reduce the appearance of blemishes, and closes the hair shaft, making hair look and feel softer and shinier. It can also calm itchy patches and reduce that ashy look of dry skin.

You can bet that a cold shower first thing in the morning will wake you up almost instantly, and science backs this up—in fact, as your lungs rush to take in extra oxygen due to the cold, your heart pumps that oxygen quickly through your body, resulting in a lasting energizing effect. In addition, two to three minutes in a cold shower (after a warm shower, in which the temperature is gradually lowered) has shown some promise in relieving symptoms of depression and anxiety; it seems that the shock of the cold sends lots of electrical impulses from peripheral nerves to the brain, like a mild sort of electroshock therapy.

While it’s not clear that cold showers up the sperm count, hot showers and baths may have an effect on your sperm. There’s also some evidence that cold water increases testosterone levels in men. Try cooler showers if you’re trying to conceive.

Unless you’re an elite athlete, you likely don’t have easy access to a daily ice bath. A cold shower can offer similar benefits, though, like improved circulation to muscles (especially if you alternate with hot water) and the speedier removal of lactic acid and other toxins from your blood.

When you stand in an icy spray, your brown fat (the kind that keeps our bodies warm) activates a calorie-burning system to warm you up, which causes your body to burn off white fat (the kind we don’t want). One Scandinavian study showed that this daily cold exposure could result in weight loss of nine pounds per year—just from taking a cold shower!

That same increase in metabolic rate that helps you lose weight also activates your immune system to send out extra white blood cells, stopping any invading germs in their tracks. Cold showers also activate your lymphatic system, which pumps fluids throughout your body to remove waste from your cells. Many studies over the years have linked cold exposure (whether it be cold water or just cold air) to lowered incidence of flu, fewer sick days at work, and other indicators of overall better resistance to infectious disease.

It’s important to note that icy cold showers aren’t recommended for those with heart disease, high blood pressure or increased risk of stroke. The sudden drop in temperature causes an immediate rise in heart rate and blood pressure, which puts extra stress on those who already have cardiovascular issues.