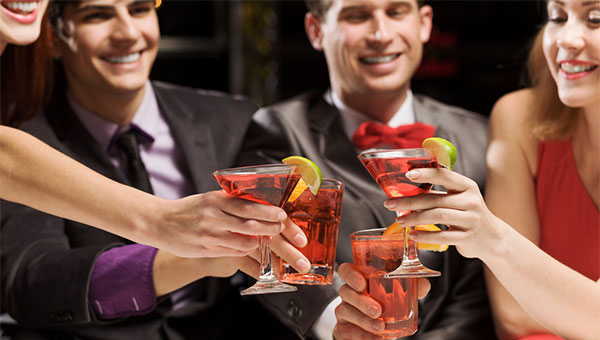 The holidays are packed with cocktail parties, dinners with family and friends and celebratory nights on the town, filled with good food, lots of laughs and the occasional cocktail. The most important thing to remember when enjoying a little holiday cheer is to track the effects that alcohol has on your body. Alcohol affects everyone differently, specifically when comparing men and women, and considering body weight. When you take a sip of alcohol, your body starts to metabolize it. Our bodies don’t have a process for storing alcohol like it does with proteins, carbs and fats. That first sip of alcohol may take up to two hours to leave the body, but not before making contact with a number of organs and having effects on others.

In a 2013 study in the Journal of Neuropsychopharmacology, researchers found that sipping on a drink releases a hormone called dopamine. This influences the “reward” center of the brain. Alcohol alters the level of chemical messengers in your brain that control mood, perception and behavior.

Alcohol plays with the hormonal and inflammatory responses to exercise, which makes it difficult for the body to repair damaged proteins and build new ones. It’s recommended that you give your body enough time to recover properly before you reach for a drink.

Drinking may cause the heart to become weak and beat in irregular patterns, called arrhythmias. This can also put drinkers at risk for developing high blood pressure.

If you’re looking to resist temptation, serve a “mocktail” at your gathering. Try something festive like cran-apple cider. Combine equal parts cranberry juice and apple cider in a cinnamon-sugared martini glass, topped with a rock candy swizzle stick. Take it up a notch on New Year’s Eve and ring in 2018 with a sparkling blue Hawaiian mocktail. Break out your fancy champagne glasses and coat the rims in blue sprinkles. Next, mix 2 ounces of blue fruit punch and add sparkling grape juice or sparkling cider until the glass is full. Raise a glass and toast to a new year!