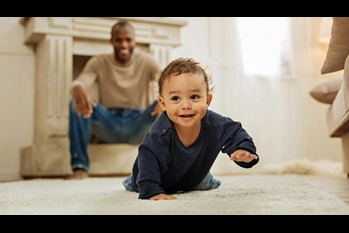 Crawling is a huge milestone for your baby—though you may have mixed feelings about it. That new mobility that’s so exciting for baby can make parents nervous. After all, you never know where your baby will end up when you leave the room!

How do babies crawl?

Within the next couple of months, after becoming an expert sitter, your baby will probably begin learning to crawl. But, don’t be surprised if the preferred method of getting around isn’t what you expected. Many babies never take the traditional route of crawling. Here are some common “crawling” techniques you might see instead:

Just like it sounds, babies scoot around on their bottoms, using one or both hands to propel them in the direction they want to travel. Scooters may have both legs in front, or they may drag one leg behind.

Think of it like the videos of basic training, where military recruits crawl under barbed wire on their bellies. Commando babies keep their bellies on the floor, using their elbows and sometimes their knees to move forward.

This is similar to the traditional hands-and-knees crawl, except bear babies keep their legs straight, walking on their feet instead of their knees.

Crab crawlers are somewhere in between classic crawlers and bear babies, using their hands, one knee and one foot to crawl around (usually somewhat sideways).

Possibly the funniest way babies learn to get around is by rolling. This can come not too long after they learn to roll over from back to front—sometimes well before the traditional crawling age. Stay on your toes if you have a roller, because they can be fast and seemingly come out of nowhere right in front of your feet.

What if baby doesn’t crawl?

You can certainly talk to your doctor if you’re concerned about your baby’s apparent lack of motivation, but it’s almost always nothing to worry about. Many overachievers skip the crawling stage altogether and go directly to pulling up and walking!