Many factors play into determining if you will need chemotherapy to treat your breast cancer, including your overall health, your age and what stage your cancer is in. In addition, some patients receive chemotherapy before surgery to help shrink their tumors, and others receive it after surgery as follow up treatment. Your oncologist will help determine if you need chemotherapy and set an appropriate schedule for your treatment. 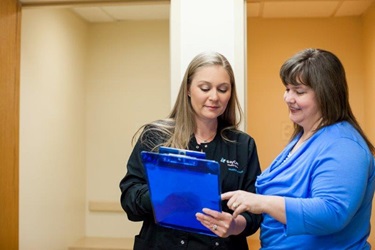 BayCare also offers women accelerated partial breast irradiation technology, which consists of a shorter, more intense course of radiation therapy following a lumpectomy. Traditional postoperative radiation therapy involves treating the entire breast with external beam radiation every day for six to seven weeks. With accelerated partial breast irradiation, a balloon catheter is inserted through the breast tissue directly into the lumpectomy bed. A radioactive source then delivers highly targeted radiation dosages through the catheter, every day for only five days. This radiation technique allows patients to complete their course of radiation in just a week.

Biological therapy (also called immunotherapy, biological response modifier therapy, or biotherapy) uses the body's immune system to fight cancer. The cells, antibodies, and organs of the immune system work to protect and defend the body against foreign invaders, such as bacteria or viruses. Doctors and researchers have found that the immune system might also be able to determine the difference between healthy cells and cancer cells in the body and eliminate the cancer cells.