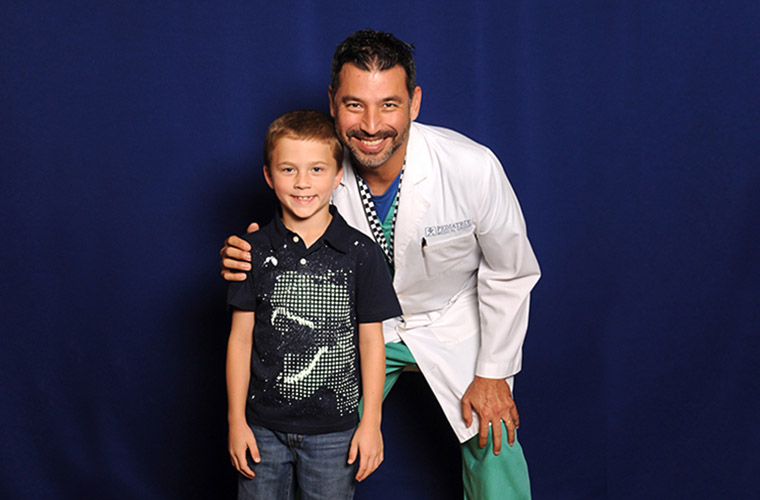 Moments after Titan Latimer was born, he was diagnosed with hypoxic ischemic encephalopathy (HIE), a condition that can occur when the brain fails to receive adequate amounts of blood or oxygen around the time of birth. In Titan’s case, his umbilical cord was wrapped around his neck during delivery.

Newborns at St. Joseph’s Women’s Hospital who experience HIE have a better chance of survival and improved neurological outcomes thanks to a treatment known as therapeutic hypothermia, or cooling. Titan was the first patient at St. Joseph’s Women’s Hospital to be cooled 10 years ago, and more than 150 patients have undergone the treatment since then.

According to Dr. Alfonso Vargas, medical director of St. Joseph’s Women’s Hospital’s Therapeutic Hypothermia Program, the process works by placing the newborn on a special cooling mattress that carefully brings the baby’s temperature down several degrees below normal body temperature. The cooling process continues for three days, while the hospital’s neonatologists closely monitor the baby’s condition. After 72 hours, the infant’s core body temperature is slowly warmed back up to normal.

“Cooling helps to slow down brain metabolism and reduce acid buildup and inflammation occurring as a response to the initial brain injury,” Dr. Vargas said. “All of this helps to decrease the likelihood of further brain injury and allows the brain itself to start healing.”

During the therapeutic cooling process at St. Joseph’s Women’s Hospital, there is a one-to-one ratio of specially trained nurses who observe the newborn around the clock. The baby is continuously evaluated by multiple different modalities – head ultrasound and brain MRI, continuous electrical monitoring of the brain with special seizure detection software and frequent laboratory evaluation to name a few.

In order to be effective, cooling must be initiated within six hours of birth and Dr. Vargas emphasized that it’s critical to get eligible babies started on this treatment as soon as they qualify. St. Joseph’s Children’s Hospital’s Neonatal and Pediatric Transport team are able to provide active cooling during transport, whether the baby is transported via St. Joseph’s Children’s Hospital’s Neonatal and Pediatric Mobile ICU ambulance or helicopter.

Today, Titan is healthy, active and thriving. It’s a miraculous outcome his mother, Samantha Latimer, said she will never take for granted. He just celebrated his 10th birthday at Universal Studios, a trip he’s been looking forward to for months.

“I will forever be grateful to the doctors and nurses at St. Joseph’s Women’s Hospital for giving my child a chance to have a normal life,” said Samantha. “They provided so much emotional support during the hardest time in my life, and never stopped fighting for Titan.”