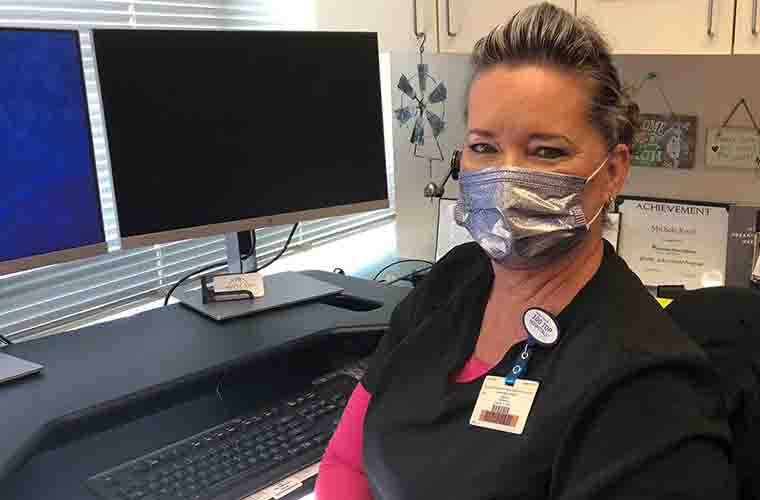 In her role as a scheduler for the Susan Cheek Needler Breast Centers, Michele Reed has helped thousands upon thousands of women in the past 17 years. Imagine the irony when she learned in April 2020, that she, too, had breast cancer.

“I was in complete shock,’’ Reed said, ‘’and when I told my kids, they were like, ‘What?’ They were incredulous.’’

Reed’s journey with BayCare helped prepare her for her own breast cancer journey. With BayCare since 1999, Reed is known for fighting tenaciously for her patients, who are in the beginning steps of their treatment. Whether she’s scheduling a biopsy or MRI, she tries to squeeze the patients in as quickly as possible. Often the women are scared or crying, and no one wants to wait. Reed has always understood that.

“You’ve got to care about helping people get through it,’’ she said. “They’re already beside themselves.’’

Reed said she might schedule as many as 80 patients a week between Morton Plant and Mease Countryside hospitals, all with her full attention and determination to do the best she can for them. Once when an elderly woman needed a ride to an MRI, Reed took the matter into her own hands and drove her there and back.

Her compassion toward patients and determination to help them has not gone unnoticed. Reed recently was honored with the prestigious Morton Plant Mease WOW! Team Member Excellence Award for outstanding teamwork and commitment to excellence.

As much as she helps others, though, Reed had been behind in caring for herself and getting her own screening. When she did, in April 2020, the results were not good. She knew the steps ahead all too well and the people who would be helping her. The familiarity was comforting.

“I have seen what our team can do,’’ Reed said “We are very blessed to have such a wonderful team of breast cancer physicians right here in our community.’’ Reed started chemotherapy on April 30. She went every three weeks for four rounds, even on her birthday. Her treatment was during the height of COVID-19, and she had to go by herself, which was admittedly “a little scary.’’

“I totally believe people need support,’’ she said. “It was a sad time.’’

When that ordeal was over, she and her three daughters and son rented a house in Orlando and had “a finished chemo party.’’

Surgery and radiation followed, 199 days of cancer treatment all told. She is cancer free so far and is scheduled for an MRI in October and a mammogram in April. She sees her oncologist every three to six months.

Still, there are frustrations.

“I hit a low point after it was all over, in the fall of 2021,’’ she said. “I was always an active person, would walk the Causeway, go to the gym, but I can’t do the things I used to. The mental part is hard.’’

Having been through the fight herself, Reed thinks she relates better than ever to her patients. She can say she’s been through it, and it’s reassuring to them.

“I try to share a little of my story with the ladies who are extremely upset, and it seems to help them feel a little better,’’ Reed said. “I am happy I can make people feel a little less scared when receiving their news.’’

She is one of them now.

That will never be more evident than on June 3, when Reed will join other breast cancer survivors at BayCare Ballpark in Clearwater to take part in Pitch for Pink, an annual event that raises money for breast cancer services at Morton Plant Mease hospitals. Each year at a Clearwater Threshers baseball game, the Threshers and Morton Plant Mease Health Care Foundation host this special event.

The highlight of the evening is the ‘’Survivors’ Walk,’’ where breast cancer survivors take the field from their seats in left field, walk around home and up the first-base line where they are greeted and hugged by doctors and team members from Morton Plant Mease breast cancer teams.

Reed attended Pitch for Pink for years in a show of support for the breast cancer survivors. Now, with her daughters by her side, the cheers will be for her.