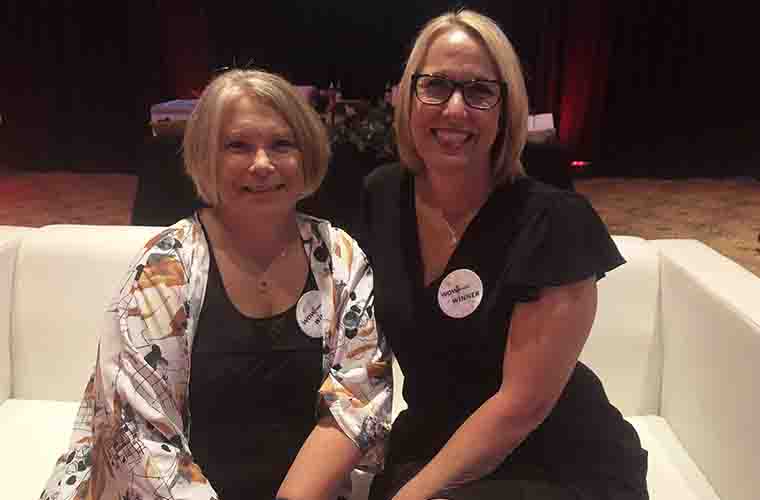 Wendy and Brenda are sisters recognized by their peers for providing extraordinary care.

Wendy Chierici didn’t have long to bask in the limelight. She learned on a Tuesday that she had won the prestigious Morton Plant Mease WOW! Team Member Excellence Award.

A surgical tech and scheduler for the Labor & Delivery unit at Mease Countryside Hospital, Chierici texted the news to her younger sister, Brenda Johnson, an RN in the same department.

“I was teasing her, and then I had to eat my words,’’ Chierici said, laughing.

Days after receiving the text, Johnson found out she had won the WOW! Nursing Excellence Award and quickly let her big sister know she, too, had been duly recognized.

There aren’t records to verify if they are the first siblings on the same unit to be winners, but it’s a rare occurrence at best.

Dating to around 2004, the Morton Plant Mease WOW! Nursing and Team Member Excellence Awards recognize those who stand out from the rest, demonstrating outstanding customer service, teamwork and commitment to excellence. Winners and finalists, nominated by their peers, are honored each year at a gala celebration.

“We have so many extraordinary team members; we’re very blessed,’’ said Brenda Carvalho, nurse manager of the department. “Having peers recognize sisters for their commitment to patients, self-less dedication and outstanding work ethic, it’s quite an honor.’’

Chierici has been with BayCare five years. She was hired as a surgical tech, but her duties quickly expanded. She does scheduling and billing, orders supplies, covers the front desk, and can drop everything on a moment’s notice, if needed, to assist as a surgical tech on emergency C-sections.

Her versatility is valued. As Carvalho said, “Wendy is my go-to on so many things. She assists me with so many tasks above and beyond her normal role. She is incredibly resourceful, and if I have a question she doesn’t know the answer to, she’ll find out who does.’’

Similarly, Johnson, a clinical nurse III, has been described as “the glue that holds the night shift Labor & Delivery team together.’’ Known for unfaltering calmness during the most dire situations, she recently led the team’s resuscitative efforts and helped save the life of a patient and her unborn baby.

Johnson, with BayCare for 11 years, said she knew from age 5 she wanted to be a Labor & Delivery nurse. She was visiting her grandmother in the ICU when she turned to her dad and proclaimed, “I want to deliver babies.’’ She had been at the hospital when one of her nephews was born and came away inspired.

There would be some challenges, but nothing would stop her. She became an LPN first, and while married with two children, worked at night and went to nursing school during the day.

“I was strong-headed and did it my way,’’ she said.

From Illinois, Johnson was the first to move to the area, followed by Chierici after her first husband passed away, and younger sister Missy, a NICU nurse who worked for a time at St. Joseph’s Hospital.

Working different shifts, Johnson and Chierici don’t interact much at work, “except when she calls me at 5 in the morning to say they need me to come in early,’’ Chierici said.

Talking to them, mischief is apparent. “We’re close and sibling rivals,’’ Johnson said.

Johnson, 2½ years younger than Chierici and the third of four girls, recalls sharing bunk beds and, from the bottom, kicking Chierici’s mattress and trying to make her fly off the bed. Chierici remembers Johnson getting in fights and “getting her way a lot.’’ Neither could forget a family trip to the Wisconsin Dells, when Chierici, Johnson and older sister Lorrie went bike riding. “Don’t lose your sister,’’ dad implored the older girls. That’s promptly what happened.

Their father is gone now, but raising them alone from their early days, he instilled values that define them today.

“The sisters are alike with their work ethic, hands down. It’s impeccable,’’ Carvalho said. “They refer to their dad a lot. He raised them to be strong, independent women, and they’re family-oriented to the core.’’

Teasing aside, the sisters are proud of each other’s WOW! Award honors.

“It’s humbling,’’ Johnson said. “It’s rewarding to be recognized by your peers and the hospital. It means a lot.’’

In this case, doubly so.

To learn how to be part of BayCare's extraordinary team, visit www.BayCare.org/Careers.