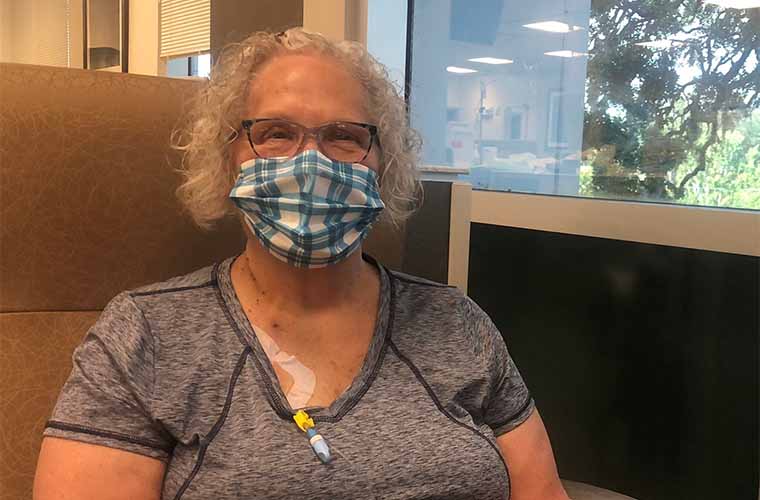 Teresa Seawright recently felt lightheaded and dizzy. She attributed it to overheating the previous day and thought it would pass. Maybe it would, but her friend wasn’t so sure. She offered to take her to Morton Plant Hospital’s Emergency Department – an offer that may have saved Seawright’s life.

A chest X-ray showed a small lump on her lung. The clinical team did a chest CT scan and advised Seawright to follow up with her primary care physician. He referred her to pulmonologist Joseph Romero, DO, and the hospital’s recently formed lung nodule clinic.

The lung nodule clinic is made up of a multidisciplinary team of medical experts, who work together to identify possible lung cancers early to quickly get patients the care they need.
According to the National Cancer Institute, lung cancer is the leading cause of cancer death in both men and women in the United States, primarily because it often goes undetected until it has spread to other organs.

“We created the lung nodule clinic to meet the need we see in our community and the general population,” said Dr. Romero, the lead physician at the clinic. “There are many obstacles facing patients including lack of education or misconceptions about lung cancer, lack of adequate screening for appropriate patient populations, and prolonged work-up, which may delay diagnosis or lead to more advanced stages before treatment can be obtained.”

According to clinic coordinator Debbie Ellis, RN, the goal of the lung nodule clinic is to be fast. “We work to remove the barriers for the patients,” she said. “I make the phone calls, schedule appointments, answer questions and try to put the patients at ease.”

Most of the patients that come through the lung nodule clinic have had a low-dose CT scan at one of four BayCare outpatient imaging sites including Morton Plant Hospital, Bardmoor, Countryside and Trinity. These low-dose CT scans are graded on a scale of one to four. If the score is a four, the clinic reaches out to the patient’s primary care physician to offer its services.

When Seawright went to the clinic, she mentioned that her mother had died from lung cancer at age 47. Immediately, Dr. Romero scheduled a biopsy using ION robotic-assisted bronchoscopy.

“ION gives us the ability to biopsy small nodules making it possible to find cancer at the very early stages and also rule out malignancy in suspicious nodules,” said Dr. Romero. “The fast turnaround time for this procedure allows initiating treatment evaluations within just a few days.”

“In March I had my biopsy, and in April I had surgery,” Seawright recalled. 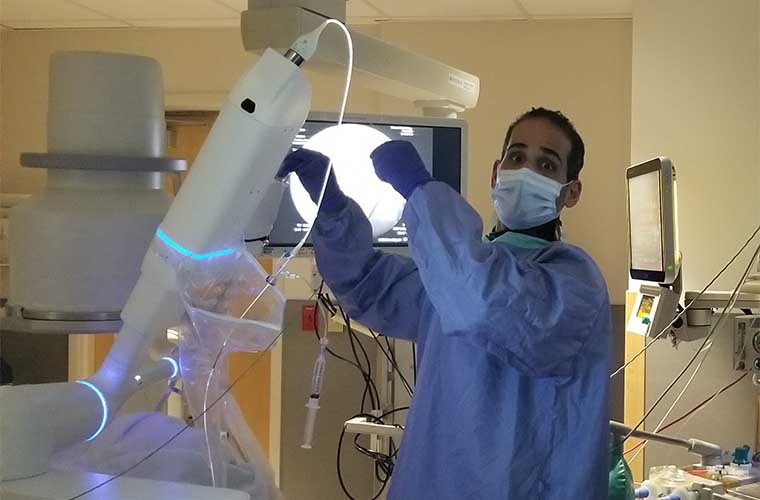 Seawright’s surgeon was cardiothoracic surgeon Michael Kayatta, MD, who is also one of the primary doctors at the clinic.

“Thanks to Dr. Kayatta I only spent two days in the hospital and have five small incisions on my side – not much considering they removed half of my lung and several lymph nodes,” Seawright said.
“Advances in technology have been game changers for patients,” said Dr. Kayatta. “Compared to conventional lung surgery, robotic-assisted instrumentation, such as with the da Vinci robot that we used for Seawright’s surgery, drastically reduces pain and recovery time and allows for a much quicker return to work and regular activity for lung cancer patients.”

Seawright’s care through the lung nodule clinic didn’t end with her surgery. She then saw oncologist Ben Yan, MD, who is also part of the clinic. He prescribed chemotherapy, a word that made Seawright anxious.

“Ellis took me to the infusion clinic before my first appointment,” Seawright said. “She introduced me to people and explained everything that would be happening to me. These extra steps helped to calm my nerves.”

Six months ago, Seawright had no idea she had cancer, but through the work of the team at the lung nodule clinic she was diagnosed early, received treatment quickly and has received a clear MRI.

“Not only are we able to make the diagnosis in asymptomatic patients at an earlier stage, but we are also able to expedite both their diagnosis and treatment, partly because of the multidisciplinary approach we take to ensure the right treatment for each patient,” explained Dr. Kayatta.

Dr. Romero said early detection and treatment can change outcomes for those diagnosed with cancer, and that is the clinic’s goal. Seawright is thankful for this clinic and the work they do. “The comprehensive care at the lung nodule clinic is a godsend,” she said.