BayCare Helps Train the Next Generation of Triathletes in St. Pete 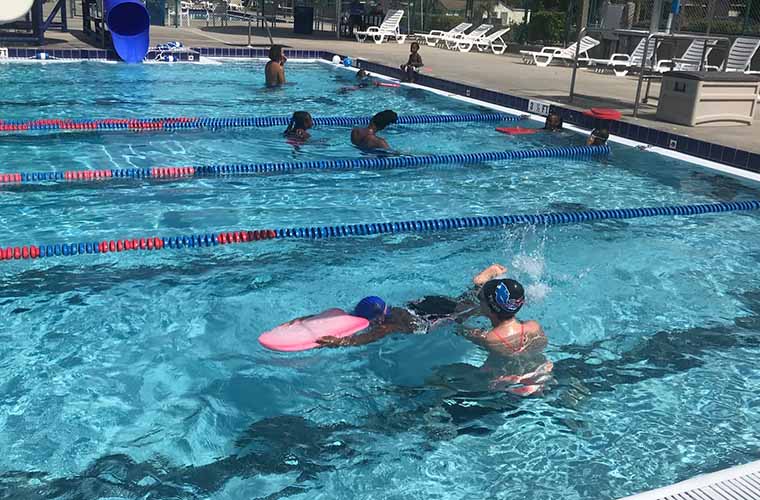 Samiya Whitaker, 7, receives swimming pointers from one of three BayCare coaches, after overcoming her initial fears about participating in the Meek & Mighty

Splashing through aqua-blue water, 7-year-old Samiya Whitaker clutches a pink foam board and keeps her legs kicking mightily – moving ever so slowly toward a dream destination that only recently had seemed beyond reach.

In one sense, it is merely a snapshot scene of 10 children working on their swimming techniques on a steamy Wednesday afternoon, a much-anticipated activity following a long day at school.

But in reality, this is all part of a unique investment in children’s fitness from BayCare Health System that materialized over the summer: Build a team of eager school kids training for an event they had never heard of only a month before – a triathlon. 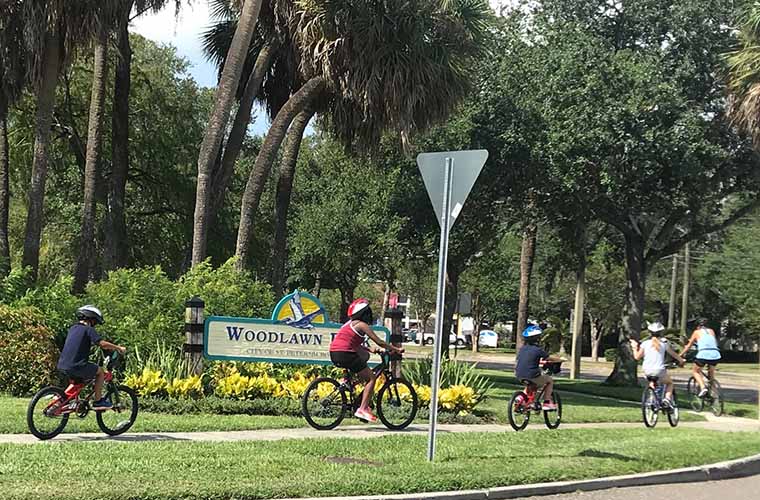 Woodlawn Elementary's Meek & Mighty team members practice their biking skills with a BayCare coach around the mile-long perimeter of the city's softball complex and the school.

The vision was to make the 2021 St. Anthony’s Triathlon more accessible for some of the city’s youth in the annual event’s competition for kids and novice adults: The Meek & Mighty Triathlon. And the plan has come to fruition with a group of children – ages 7 to 10 – from a neighborhood near St. Anthony’s Hospital.

Though St. Anthony’s announced last month it would cancel the 2021 triathlon due to continuing COVID-19 concerns, these young competitors have set their sights on the last weekend of April 2022, when the St. Anthony’s Triathlon and the Meek & Mighty (with age brackets of 7-10, 11-15 and 16-or-older) is scheduled to return to downtown St. Petersburg.

In the case of these fledgling athletes, call it a “try-athlon.”

For Samiya, giving the mini-tri a try was not necessarily a done deal when the idea initially was broached. Her mother, Lisa Hodges, was concerned that her second-grader was perhaps too young and inexperienced to participate, and didn’t want her to feel bad if she couldn’t handle the Meek & Mighty training regimen and kid-friendly race distances. Soft-spoken Simaya was unsure herself.

At an August kickoff dinner for the 10 kids and their parents, hosted by BayCare the night before the new school year began, Hodges brought along both of her daughters. But she approached

Woodlawn principal Tammy Keiper, explaining that only Zaria would participate.

For Keiper, seeing Simaya go from meek to mighty, overcoming her self-doubt and embracing the training, is a genuine highlight of the program so far.

It all started in 2019 when BayCare conducted its Community Health Needs Assessment, an initiative undertaken every three years. The results of the study identified three focus priorities – weight, nutrition and exercise was one of them.

“The St. Anthony’s Hospital leadership and the Community Benefit team thought it would be great if the hospital decided to fund a youth training program,” said BayCare’s Courtney Burt, Community Outreach Coordinator for Pinellas County.

Then COVID-19 hit. St. Anthony’s cancelled the 2020 Triathlon scheduled for April, and the hospital subsequently postponed the 2021 event from April to October.  With public schools returning more fully to in-person learning, BayCare decided it was time to put the training program into place. Woodlawn Elementary turned out to be a good fit for an array of reasons.

BayCare had just begun a relationship with Woodlawn Elementary, a Title I St. Petersburg public school with a large population of economically disadvantaged students. BayCare had signed on to sponsor the installation of an onsite food pantry at Woodlawn, in partnership with charitable organization Feeding Tampa Bay.

“I went to meet with Ms. Keiper about the food pantry, and there was such excitement over that – I was blown away,” Burt recalled. “So I asked, ‘Do you want to do our Meek & Mighty training program?’ She immediately said, ‘Yes!’ And by the end of the day, she had sent most of the students’ names over.

“She appreciated what we know at BayCare, that good health makes life better and can improve academic performance.”

There was a reason Keiper was able to assemble a team so quickly. She had been working long days during the summer, helping several groups of students on their Summer Bridge reading. To break up her schedule, Keiper always took a 30-minute walk around the mile-long perimeter of the school and city softball complex. One day, she invited her students to walk and jog with her, and it became a fun, daily routine.

When the opportunity arose to enter a team in the Meek & Mighty training program, Keiper immediately thought, “I have the perfect group to do the Triathlon!” – her summer reading students and walking companions. The only caveat: They all would have to keep applying themselves with books if they wanted to be on the triathlon team. Keiper promptly reached out to parents and received an enthusiastic response, and to fill out the team she invited a handful of siblings, like Simaya. 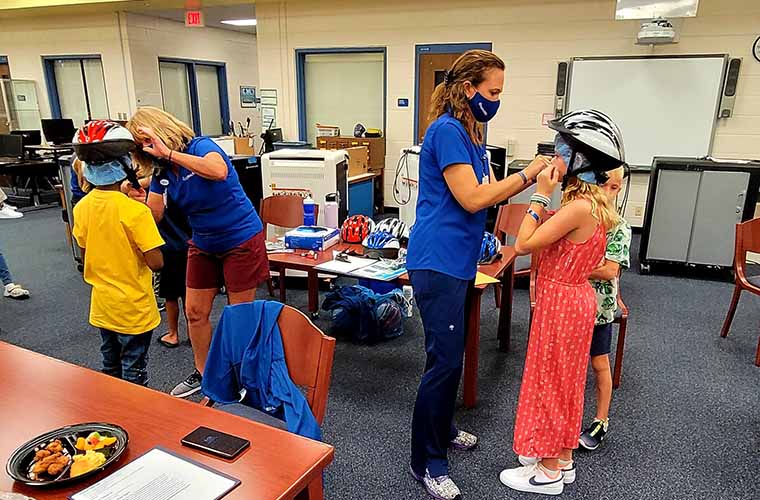 At a meeting of the students and trainers, the children were fitted with new bike helmets.

In short order, the children received free bikes, helmets and triathlon gear, and running shoes courtesy of St. Anthony’s Hospital. At the dinner, BayCare arranged for representatives of St. Petersburg

Running Company to attend and fit the team with athletic shoes. A week later, training was underway.

When St. Anthony’s announced it needed to once again postpone the triathlon due to COVID-19 concerns, BayCare pledged to keep working with the team as usual with running and biking after school on Mondays and swimming on Wednesdays. And to ease any disappointment over the delay, a newly planned swim-bike-run event that mimics the Meek & Mighty requirements has been scheduled for Wednesday, Sept. 29 after school. Then they’ll be invited to compete in the official Meek & Mighty event in April 2022, a day before the Olympic- and Sprint-distance triathlons.

In a traditional triathlon such as St. Anthony’s, adult competitors do 1.2-mile swim, a 5.6-mile bike ride and finish with a 13.1-mile run. By comparison, the Meek & Mighty event varies by age but for the youngest competitors, ages 7-10, it means a 100-yard swim, a 3.6-mile bike and a half-mile run.

“I’m really excited we have had a chance to introduce more children in our community to alternative ways to stay healthy and fit,” said Scott Smith, president of St. Anthony’s Hospital and a veteran of four St. Anthony’s Triathlons. “Our mission at BayCare is to serve the community’s health and we are proud to see these Woodlawn Elementary students participate and we are impressed with how they have embraced the challenge.”

The students have quickly made tangible gains under the coaching of Mendi McDowell, Lisa Taddeo and Camille Yodzis, members of BayCare Kids Wellness and Safety team.

“Some of the kids had never heard the word ‘triathlon’ before this, but they’ve all learned a lot very quickly,” McDowell said. “Right now, we’re working on teaching them how you transition from one event to the next. They’re really excited that they get to do three events combined into one.”

McDowell gives workout sheets to chart progress and assigns homework – like watching a YouTube video of a triathlon. At a recent run-bike practice, the three coaches worked with the students on the art of careful passing on a bike, always calling out “passing on your left!” And they did several bike laps as a group around a mile-long course, stopping halfway to lay down their bikes and jog.

Among them is another 7-year-old, Ayden, whose great-grandmother Mary comes to every practice. “I’m just so proud of him,” she says. “He loves biking and running. And he loves that Disney movie Luca about the sea monster. Even though he can’t swim that well yet, they’re teaching him!” she said.

After a run-bike practice, Zaria climbs into the back seat of her parents’ car for the ride home. She is hard-pressed to identify her favorite of the three pursuits, proclaiming, “I love everything!” Younger sister Samiya lets her sister do the talking, but her smile says all you need to know.