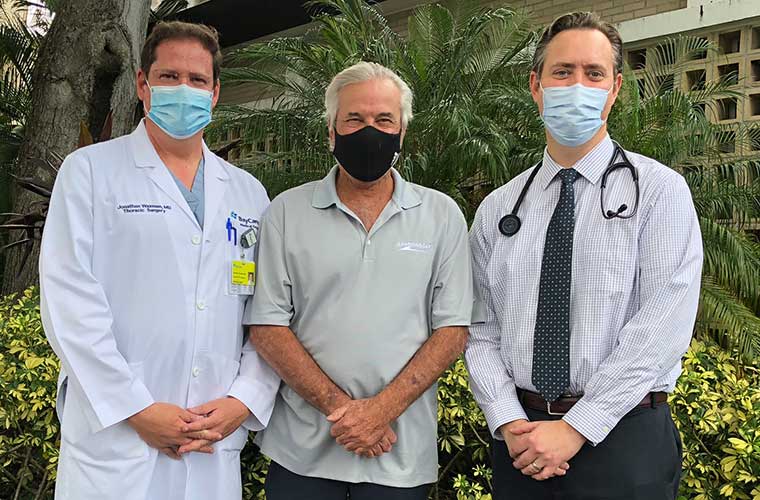 In 1964 when the U.S. Public Health Service released the first report of the Surgeon General’s Advisory Committee on Smoking and Health, William “Skip” North was a carefree preteen boy. Smoking seemed harmless to the 17-year-old Tampa native when he picked up the habit a few years later. The nicotine cravings hung on for almost 50 years before thoughts of his grandson and his family gave North the incentive that he needed to kick the habit.

North had been tobacco free for about eight months when he began feeling unwell and having difficulty breathing.  He went to the Emergency Department at St. Joseph’s Hospital in Tampa where test results revealed lung cancer. To compound the dreaded diagnosis, it was his daughter, a hospital team member, who had to give him the news. “That was rough,” North said.

North’s next step was to do some research in order to make an informed decision about his care. “We learned that there was a new doctor who had just started at St. Joe’s,” North said. He made an appointment with thoracic surgeon Jonathan Waxman, M.D., who recommended a minimally invasive surgical approach to remove the cancer. “He was very reassuring that it could be done.” Oncologist Robert Crescentini, M.D., concurred so, a few days later in June 2020, North underwent surgery.

Following the operation, North remained hospitalized for 3 days and imaging showed that he was cancer free. “It’s amazing what Dr. Waxman could do,” he said. He recuperated at his daughter’s home for about another week. His follow-up visit with Dr. Crescentini was more good news – he didn’t need chemotherapy, radiation therapy or any other treatment.

North, a 67-year-old boat broker, returned to work just two weeks after surgery – in the middle of the COVID-19 pandemic.  He takes every precaution against the coronavirus, has had no repercussions from surgery and his job keeps him active.

“I still have COPD (chronic obstructive pulmonary disease) from smoking,” North said.  He controls that with the help of a pulmonologist, periodic breathing tests and chest x-rays. “I’m getting better every day.”