After spending 37 days in the hospital battling COVID-19, Dr. Solc and his family know better than most how to cherish every moment of life.

Videos of Dr. Solc and his family’s palatable joy at his recovery has garnered media attention nationwide after social media posts went viral last week. His family has been willing to share more details as a warning to others to take the COVID-19 threat seriously.

In early March as Dr. Solc enjoyed a trip to visit friends and family in Peru, he felt like a blessed man. He had a wonderful wife, two beautiful daughters and would be retiring over the summer after spending his life’s work pursuing his calling in medicine. Life was good, but life can change on a dime.

Little did Dr. Solc know that he would be spend the month of April at Mease Countryside battling COVID-19.

Helaine, his wife, began feeling ill on the return flight on Friday, March 13. Early the next week, she went to a COVID testing site, and by the end of the week, Dr. Solc also had been tested. Over the weekend, they were home waiting for their test results, but their symptoms were getting worse. Monday came and they headed to the ER but did not require hospitalization. By Thursday, Dr. Solc’s health was deteriorating so they returned to the ER, and he was admitted to the hospital where he spent 37 days.

Helaine, in the meantime, had tested positive for COVID-19 and had to quarantine at home.

What just a few weeks ago had seemed like a great life with only good things on the horizon was spiraling downward at a rapid pace. 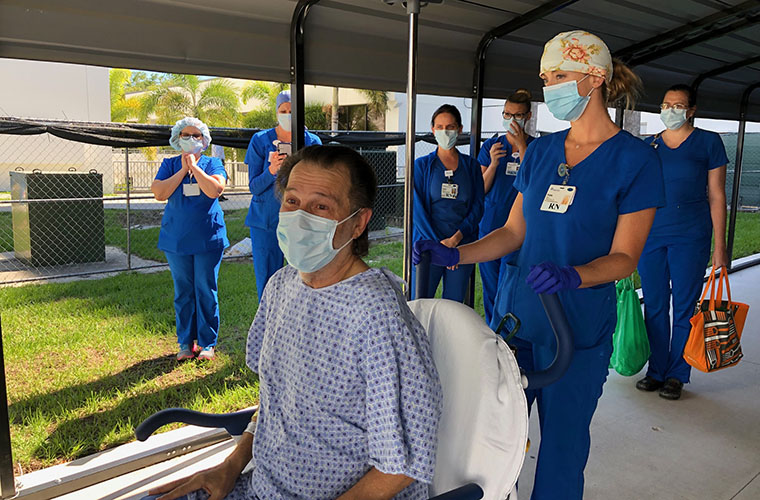 Daughters Arielle and Aliza live out of state, but quickly made their way to Florida along with Aliza’s husband. Life was now full of unknowns. With both parents ill from COVID-19, they had to shelter in place away from both parents.

Helaine began to improve, but Dr. Solc was in for the fight of his life. He spent 14 days on a ventilator and according to his family at one point was given less than a 10 percent chance of survival.

“We went through so much, and the key to our survival as a family was to take it one day at a time,” said Helaine.

The daughters and Aliza’s husband stayed at his parents’ home in Naples until the end of April when Helaine was negative.

“We love our parents, and it was so difficult not to be able to see either one at first,” said Aliza. “As our mom improved, and we could see her that helped, but we did not get to see our dad until he was discharged.”

Though the family could not visit Dr. Solc, they could encourage him. Twice a day, the nurses at Mease Countryside facilitated a phone call so Dr. Solc could hear from his family even while he was on a ventilator.

“I told the girls they had a chance twice a day to tell their dad how much they loved him and how proud they were of him,” said Helaine. “Most people don’t say that in a lifetime.”

“He truly loves life and loves to celebrate life and that’s what we kept reminding him of, you know to keep fighting, reminding him how strong he was,” said Aliza. Arielle expressed gratitude to the medical staff, “They gave him a hand to hold when we couldn’t physically be there. They printed a family photo and put it beside his bed.”

The family was so grateful for Dr. Solc’s care, they made a video to thank the team at Mease Countryside.

After spending a life helping others face tough medical diagnosis, this time Dr. Solc received the help. His fighting spirit proved a great match for COVID-19. The caring medical staff and his loving family worked hard to make sure he didn’t lose the battle.

As Dr. Solc left Mease Countryside, his heart was filled with gratitude for those who helped him so he could once again hold close those he dearly loves.