Scoliosis is a multi-faceted disorder that has both neurological and orthopedic implications resulting from an irregular curve of the spine or backbone. Normally, the spine has curves when looking at it from the side; however, it should appear straight when looking at it from the front. The spine of an individual with typical scoliosis may look more like an "S" or a "C" rather than a straight line. 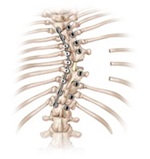 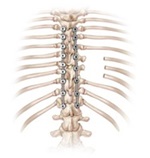 The Scoliosis Center at St. Joseph’s Children’s Hospital we have an extensive, multi-disciplined team that provides treatment for:

Who gets scoliosis?
Scoliosis can first appear in young children or even infants, but most often it shows up during middle to late childhood -- a time when the spine and the rest of the body go through a growth spurt. Girls are more likely than boys to develop idiopathic scoliosis.

What are the signs of scoliosis?
One or both shoulder blades may be elevated, the waist may be lopsided, the hips may seem unusually high or the child may lean to one side. Additionally, a rib prominence (hump) may be seen from the back when the child bends forward.

What causes scoliosis?
In most cases, scoliosis arises for no apparent reason; this is called idiopathic scoliosis. Occasionally, scoliosis is the result of an illness, birth defect (such as cerebral palsy) or a malformation of part of the spine during pregnancy; this is called congenital scoliosis.

What are the suggested treatments for scoliosis?

Call us at (813) 554-8983 to make an appointment or discuss concerns you may have regarding your child's spine. We have a full team of specialists ready to address your concerns. Whether your child is an inpatient or outpatient, we focus on their needs to provide them with a solid, individualized treatment plan.