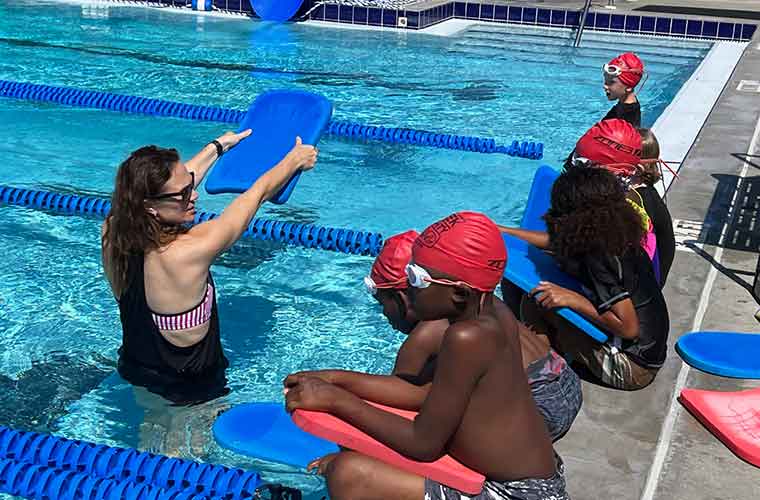 The students listen as one of the coaches from the BayCare Kids Wellness and Safety team illustrates how to use the kick board in the pool.

Tammy Keiper, principal at Woodlawn Elementary School, keeps a purple sticky note on her office computer with a list of students. Every so often, she’ll add another one – not to keep track of kids who have done something wrong or might need a helping hand in class, but to update the Triathlon waiting list.

The names belong to children simply hoping for a chance to compete in the Meek & Mighty Triathlon, part of the 2023 St. Anthony’s Triathlon.

“These kids are constantly asking me, ‘Can I do it next time? Please can I do it?,” Keiper said with a laugh.

Seventeen children from the Title 1 school with a large population of economically disadvantaged students have been diligently practicing for the past two months, under the guidance of a BayCare coaching staff. And now they are ready to swim 100 yards, bike 3.6 miles and run a half mile in an event most had never dreamed of a year ago – a triathlon.

The group includes the seven students returning from last fall. They all trained for the regular Meek & Mighty experience, which normally features large crowds and an electric atmosphere a day before the big race. Unfortunately, a rise in COVID-19 cases forced cancellation of the planned October 2021 staging of the St. Anthony’s Triathlon – derailing the world-class event for a second straight year.

As a result, the students participated in a mini “try-athlon” with the swim portion taking place at E.H. McLin Pool at Campbell Park Recreation Center, and an abbreviated bike and run held at Woodlawn, a school in a neighborhood near St. Anthony’s Hospital.

“Those kids went above and beyond and exceeded my expectations,” said Camille Yodzis, a member of the BayCare Kids Wellness and Safety team which is coaching the kids. “The day of the mini-tri, teachers and parents came out and everyone held up signs. Meek & Mighty Triathlon organizers set up a little finish line. All the kids got medals, too, to commend them for their hard work.” 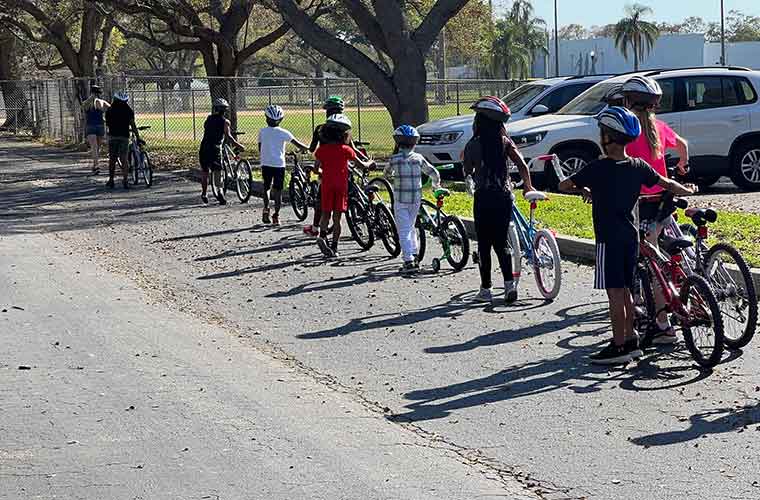 The children await instruction on the proper way to mount the bicycle in transition during practice at Woodlawn Elementary School for the Meek & Mighty Triathlon.

The seven students are back this year along with 10 newcomers, and all of them are focused on taking part in an event that gives them a true taste of big-time triathlon competition, divided into age groups of 7-10, 11-15, and 16 and older.

Twice a week after school – Tuesday’s at McLin pool and Friday’s biking and running at Woodlawn – the students have practiced their techniques. Some are relatively new to swimming; others have had to learn to use a bike with hand brakes. But all of them have made strides, thanks to the patience and knowledge of their coaches.

Collette O’Keefe-Boggs, a member of the BayCare Kids Wellness and Safety team who coordinates BayCare’s community needs-based assessment for kids’ physical activity and nutrition for Pinellas, Hillsborough and Pasco counties, reminded students: “Don’t sit up in your bicycle seats! Don’t back-pedal to brake on your bikes!”

“This has given them an opportunity they would never have had before – to compete on a major stage at a major event,” O’Keefe-Boggs said. “It’s given them a chance to stretch themselves physically, because a lot is being asked of them. Some of them struggle a little bit in the pool but they love it anyway. The only thing that gets them down every now and then is the run. But when we start adding the bike into that and doing the transition from biking to running, that helps.”

And the challenging preparation for the event helps as well – in building their confidence.

“It just makes them stronger, physically and mentally,” O’Keefe-Boggs said. “We’re trying to foster a sense of being part of a team and having the kids support each other. And by doing all of this hard work, they can face other challenges in life from this – if you put your mind to it, you can make it happen.”

Third grader Antonio Desalvo, 9, is a testament to that. He competed in last year’s abbreviated event and was lagging far behind after the swim and bike legs. But his parents watched in amazement as he started into his run, picked up the pace, and wound up crossing the finish line first.

“I’ll tell you what, I saw Antonio struggle a little on the swim and the bike,” said his father, Jeff Desalvo. “But when I saw him run, as a father that was an incredible feeling. And what’s so great is he never would have experienced this if St. Anthony’s hadn’t come into the picture.”

“It was so fun, and I’m happy that I did it,” Antonio said. “Thinking about the race this time makes me just a little nervous, but I’m excited, too.”

“What’s so fun is that he’s getting better at everything,” adds his mother, Nayla, “We’re very proud of him.”

She could be speaking for all the adults tied to Team Woodlawn. And if Tammy Keiper’s purple sticky note is any indication, it’ll be an even bigger Meek & Mighty group the next time around.

For information on the 2022 St. Anthony's Triathlon, click here.