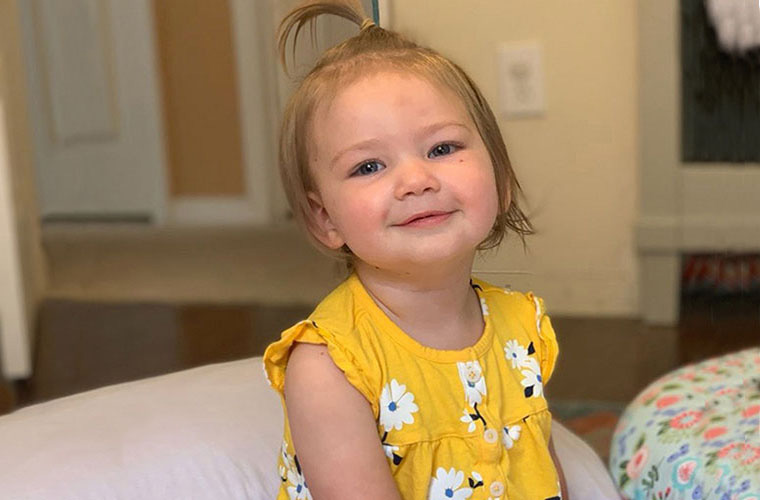 For nearly two years, storms swept across Mercedes Tanner's brain. Electrical and sometimes violent, the storms affected the normal connections between cells on the right side of her brain, causing abnormal brain function. In the deluge of the storm, Mercedes would have an epileptic seizure.

When Makenzie Tidwell was pregnant with Mercedes, she contracted a virus called cytomegalovirus, often referred to as CMV. It’s a common virus most people get at some point, but can cause serious health consequences for fetuses exposed to it through their mother’s placenta. In Mercedes' case, the right side of her brain was malfunctioning.

“We knew there was a good chance Mercedes may develop health issues as a result of the CMV, but nothing prepared us for what was to come,” said Makenzie.

The seizures began shortly after Mercedes turned 6 months old, and gradually increased in frequency and severity. What began as a few progressed to as many as 30 seizures a day, and even occurred while she was sleeping.

According to Makenzie, medication helped control the seizures but only for short periods. She also put Mercedes on a ketogenic diet, a modality of treatment which has shown to help control seizures in some people with epilepsy, but this also only worked briefly.

“No matter what we tried, eventually the seizures would start again,” Makenzie said. “But throughout it all, my faith kept me afloat. That’s one thing that never, ever waivered.”

Since medicines were no longer working, Mercedes’ neurologist, Dr. Eric Vernier, suggested they try another treatment approach. At his recommendation, they met with BayCare Kids Chief of Pediatric Neurosurgery Dr. Abilash Haridas.

“When a child develops debilitating seizures at a young age, it becomes like a wildfire in the brain that can create long-lasting damage,” said Dr. Haridas. “When they increase in frequency this drastically and medication isn’t effective, there is a possibility the seizures may lead to sudden death.”

Dr. Haridas determined that the best option for giving Mercedes a chance for a normal life was to remove the entire right side of her brain, a procedure called a hemispherectomy. During a hemispherectomy, one side of the brain is surgically disconnected from the rest of the brain so that seizures that originate in that hemisphere have nowhere to go. It is a rare and complex procedure usually only performed on patients with severe seizures originating from only one side of the brain that are not responsive to medications.

Because of the brain’s neuroplasticity – its ability to retrain itself to perform new functions - if one side of the brain is disconnected, the other side will take over some of the functions lost.

“No one really knows why the brain is able to adapt in such a way, that’s what makes it such a miracle surgery for carefully selected patients,” Dr. Haridas said.

He adds that it’s completely understandable for families to want to get second opinions or take some time to digest the recommendation. But at the same time, research shows that the procedure is most successful when it’s done at a very young age.

“It’s not an easy conversation to have with parents,” Dr. Haridas said. “A decision like this is a one-way street. Once it’s removed, you can’t go back. However, the earlier it’s done, the more time the patients have to adapt and recover. So, I tell families to take some time, but not too much time.”

Understandably, the recommendation to remove half of Mercedes’ brain was a lot for Makenzie to take in. For months, she and her family researched the benefits of the procedure, the risks involved if they did it, the future of her baby’s health if they didn’t. They also prayed for guidance in making the right choice for Mercedes. Eventually, they decided it was the best option.

During the eight-hour surgery, which took place at St. Joseph’s Children’s Hospital, Dr. Haridas removed the right side of Mercedes brain which is where the seizures were coming from.

“We were told there may be a chance that she wouldn’t be able to use the left side of her body after the procedure, but nothing could stop my Mercedes,” said Makenzie. "They came out after she was in recovery and said she was clapping her hands. Both hands!”

Mercedes spent 11 days in hospital after the surgery, and by the time she was discharged she was moving the entire left side of her body.

“It’s so fortunate that we’re able to perform these high-risk brain surgeries at St. Joseph’s Children’s Hospital, with great outcomes,” Dr. Haridas added. “Mercedes’ brain was hijacked before by the seizures. Now it’s free and thriving with hope.”

Mercedes is now reaching developmental milestones, growing stronger each day and hasn’t had a seizure since the surgery.

“It was a very difficult decision to make, but it was the right one for us,” Makenzie said. “Our faith gave my family absolute peace with the decision. We have no regrets.”