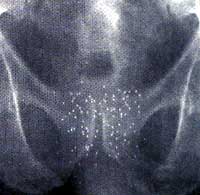 Also, known as “Interstitial Radiation”, brachytherapy is the permanent radio active seeds into the prostate gland under ultrasound guidance while under anesthesia. Brachytherapy delivers a prescribed dose of radiation directly to the cancer cells while decreasing the risk of radiating surrounding tissues or organs. Generally, it is an outpatient procedure. In certain situations, both prostate brachytherapy and external radiation many be recommended.

The seeds are approximately four millimeters long and less than a millimeter in diameter. An average of eighty to one hundred seeds are implanted.