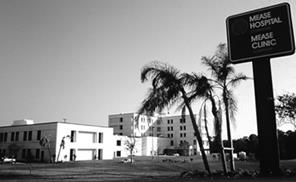 In 1978, Mease Hospital opened a satellite clinic on 22 acres of land on McMullen Booth Road. Two years later, a second floor was added, doubling its size.

In 1981, the Mease board of directors applied for a certificate of need to build a 100-bed hospital on the Countryside clinic site. The state approved the request in 1982 and ground was broken that same year. The new Mease Countryside Hospital opened in 1986 and it has not stopped growing since.