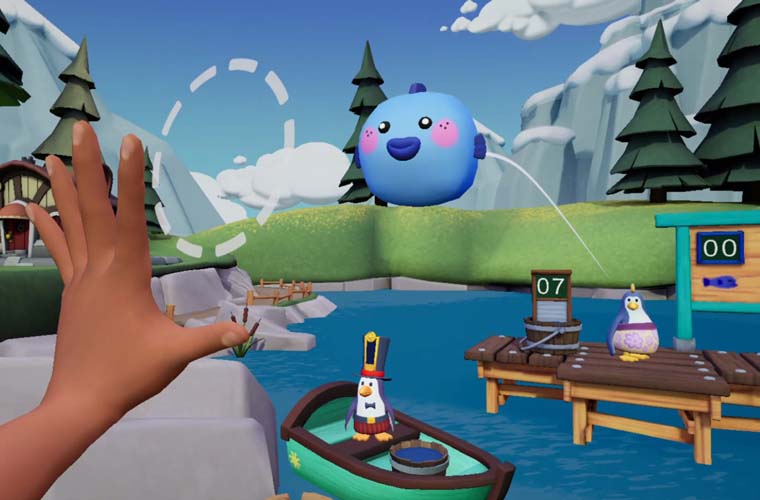 The REAL System asks patients to perform tasks like lifting their arms up and down to control objects in the game, following the movement of objects with their eyes and snatching objects out of the air.

One recent afternoon, Shonda Smith dodged fish in her patient room at St. Joseph’s Hospital. She wore a white headset and a smile, as a video-game penguin hurled fish at her. Shonda’s task was to grab blue fish and evade red fish – a challenge requiring motor and cognitive skills that are often impaired for stroke patients.

Rehab isn’t always called fun, but thanks to a virtual reality (VR) system now offered at St. Joseph’s Hospital, patients like Shonda have been excited for their physical therapy sessions.

The REAL System is a VR platform designed to help patients regain control of their movements. The platform features games of different complexity to help patients work on motor and cognitive skills, visual tracking, reflexive movements and more.

“This was my first stroke,” she said. “It was unexpected.” 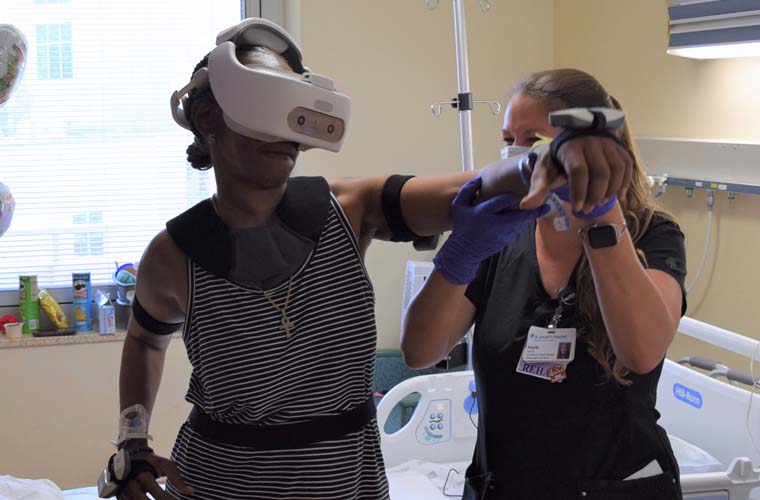 Shonda’s stroke impacted the right side of her brain and impaired the left side of her body including her left arm and leg. When she started therapy using the REAL System at St. Joseph’s Hospital, it was anything but easy.

“I built up a sweat on my first day,” she said, laughing. “I got in my cardio that day.”

The REAL System asks patients to perform tasks like lifting their arms up and down to control objects in the game, following the movement of objects with their eyes and snatching objects out of the air.

During physical therapy sessions with Shonda, Ray selected games that got progressively more complex as she made progress in her treatment. After each session, Shonda grew more capable at playing the games.

BayCare has implemented VR in other settings, too, including as a tool for neurosurgeons to plan complicated procedures at St. Joseph’s Hospital and St. Joseph’s Children’s Hospital.
Besides offering patients a unique experience that provides an alternative to typical physical therapy sessions, Ray said the VR games help keep patients motivated as they see their progress in real time.

“It gives them a huge morale boost,” he said.

Shonda has plenty to be motivated for. Her sister is getting married next year. Thanks to her therapists at St. Joseph’s Hospital, Shonda is confident she’ll be there to walk down the aisle.

To learn more about the rehab program at St. Joseph’s Hospital, click here.