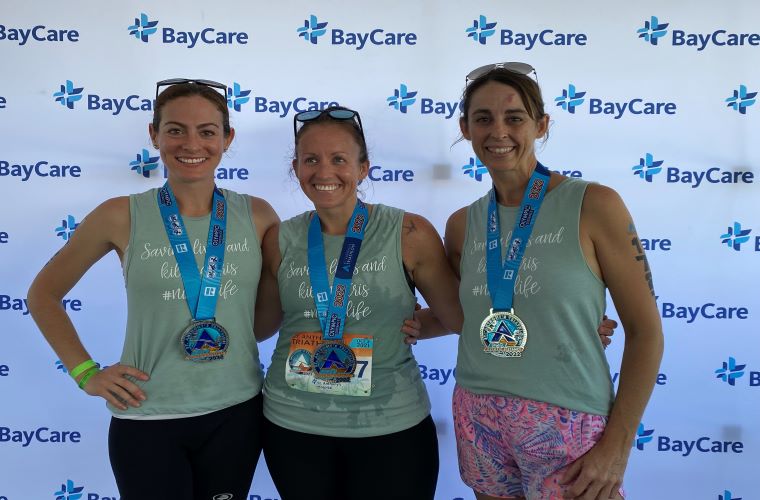 Jaime Lillo, Tina Geiger and Jayce Elliott, nurses who were on the front lines of the COVID-19, started training for the St. Anthony’s Triathlon to relieve the stress of the pandemic. They consider crossing the Triathlon finish line a fresh start for them.

ST. PETERSBURG, Fla. (May 1, 2022) – The sun was just starting to rise with an orange glow shortly after 6 a.m. as the opening moments of the 39th St. Anthony’s Triathlon drew near Sunday morning.  And for three female participants in the huge crowd by the swim-start area – Jaime Lillo, Tina Geiger and Jayce Elliott – the sun was finally about to shine on a shared dream born two years ago in the darkness of COVID-19.

The trio of St. Joseph’s Hospital nurses, who have served together on the pandemic front lines, decided in 2020 to form a relay team for the St. Anthony’s Triathlon as a respite from the relentless trauma they faced on the job.

The sense of commitment, support and teamwork – the same traits that sustained them during the hardest of times caring for COVID patients – carried them through well over a year of rigorous triathlon training and on Sunday propelled them to a jubilant relay finish, with Lillo handling the swimming leg, Geiger the biking and Elliott the running.

As the three admired one another’s medals and basked in the glow of their strong individual times, Elliott talked about how competing helped them through difficult times of COVID. “It gave us something else to focus on,” she said. “We would talk to each other about the stress of work because people at home didn’t understand. It was nice to have something to talk about to each other that was not stress related.”

After leading most of the way, defending champion Ben Kanute  of Phoenix, Ariz. was overtaken by Boulder, Col.’s Matthew Sharpe on the final turn of the 10K run, and Sharpe then held off hard-charging Matt McElroy of Huntington Beach, Cal. for his first triathlon win in 10 years. 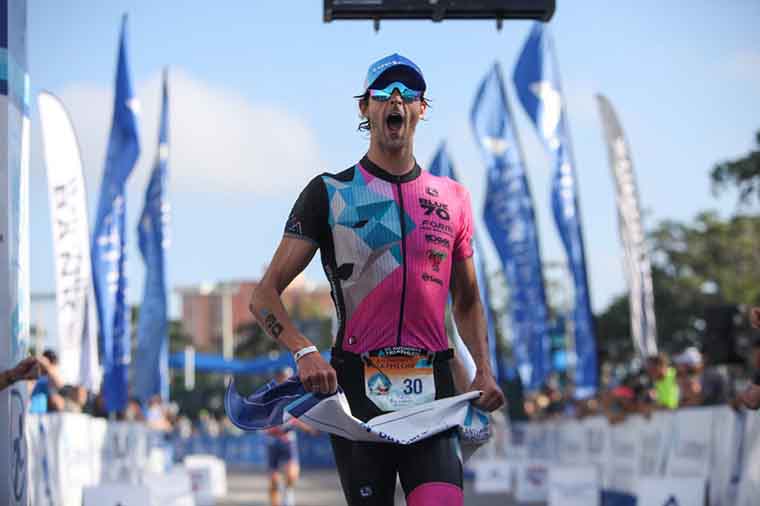 Matthew Sharpe, of Boulder, CO, won his first St. Anthony’s Triathlon men’s championship in dramatic style, beating out Matt McElroy by one one-hundredth of a second in the 39th race.

Here’s how close it was: The razor-thin difference between first and third place was just .05 seconds. Sharpe won with a time of 1:44.14, McElroy just several feet behind, took second at 1:44.15; and Kanute was third at 1:44.19 – a sign of how intensively competitive the sport has become at the top tier.

“The last quarter mile and you (Matt McElroy) came on really hot, and I was like, ‘Okay, here we go – we’ve got the three guys, and these guys are great athletes, so you definitely can’t count anyone out,” Sharpe said. “I just remember hitting that corner and just trying to get that inside line as much as I could, And as I went through the last corner, I just hit full gas and I was able to hold off these guys.”

By contrast, the women’s professional winner, Paula Findlay of Bend, Ore., won with relative ease in a time of 1:55:35, with Australia’s Amelia Rose Watkinson placing second at 1:56:38, and Lafayette, Col.’s Amy Sloan taking third with a time of 1:57:05. 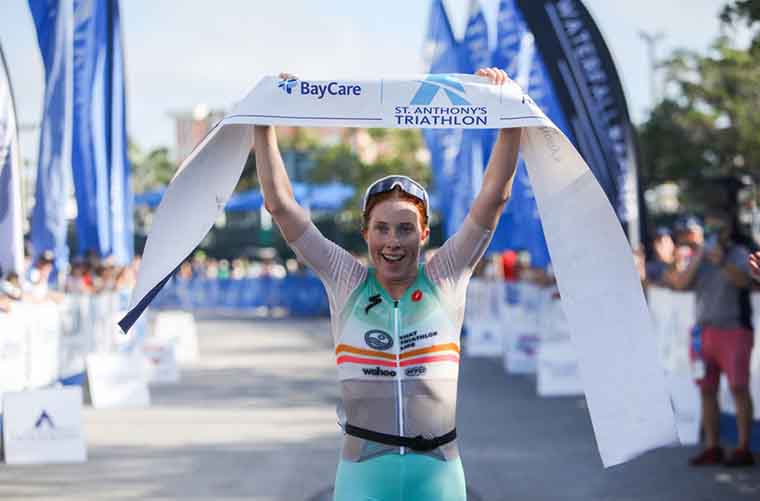 Paula Findlay, of Bend, OR, won her first St. Anthony’s Triathlon by more than one minute over her closest competitor.

“I just got off the bike and going as hard as I could,” Findlay said. “I normally race 70.3 (miles in the Half Ironman) distance so this felt relatively short, and I knew that if I could hold high power it would be over way sooner. That was my plan and I came off with the lead and actually felt really good on the run. This course is super fun, winding through the neighborhoods with all the crowd support.”

Prior to the race, the three St. Joseph’s nurses did a pre-dawn local TV interview, then posed for an iPhone shot minutes before the invocation, a fine a capella version of the National Anthem by local singer Riley Newton, and St. Petersburg City Council chairman Ed Montanari firing the cannon to officially start the race.

Lillo, Geiger and Elliott spoke of their decision to enter the event. They first competed in the sprint triathlon at Fort DeSoto after the 2020 St. Anthony’s Triathlon was cancelled. That gave them a taste of competition and focused them on the St. Anthony’s race, which was scrubbed again in October due to COVID concerns before finally being held Sunday.

“I’m actually nervous, and I’m not usually nervous,” Lillo said, with her swim leg 30 minutes away. “It’s exciting, but we were just saying, right now our goal is to have fun, and finish the race.”

The moment stood out for another reason: “I’ve worked for BayCare for 13 years,” Lillo added. “So, I think it’s really cool that we’re not just doing a race but we’re doing a race sponsored by BayCare, and showing that you can be a nurse, and a mom, and a wife, and you can also be an athlete. It’s very cool.”

Fast-forward four hours, and the three stood near the finish line where Sharpe and Findlay had crossed first in the pro division, and a steady stream of age-group and special categories continued to flow. After all the trauma and stress they have endured in the past few years, Sunday felt like a new beginning.

“It’s renewing,” Lillo said. “It feels like a fresh start.”