Making a Mark as a St. Anthony's Triathlon Volunteer 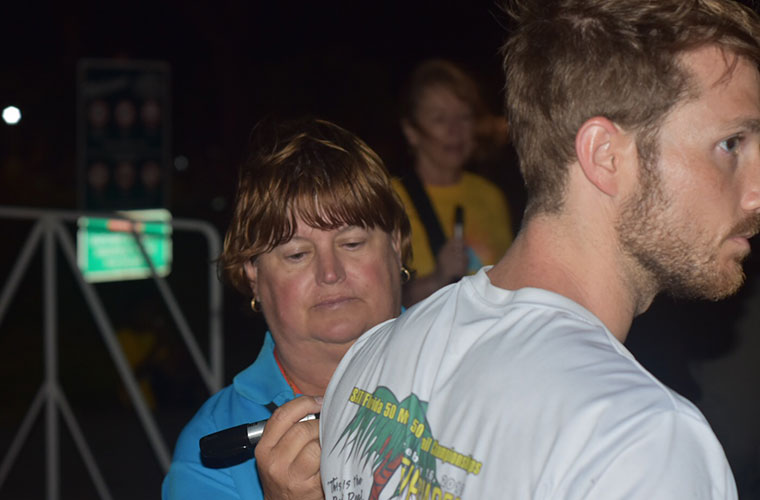 Debi Lanning, who has volunteered at the St. Anthony’s Triathlon for more than 20 years, body marks an athlete before the race in 2017. More than 1,000 volunteers are needed for the 39th Triathlon weekend, April 29-May 1.

For more than 20 years, athletes at the St. Anthony’s Triathlon have been Debi Lanning’s canvas and a black permanent marker has been her artistic tool of the trade. The veteran race volunteer’s works can be seen by everyone – competitors and spectators alike – and often has ended up splashed on TV screens and newspaper pages.

While her efforts wouldn’t be confused with a Rembrandt, she is still a master of her medium – in the fine art of body marking.

With a steady hand and meticulous execution, Lanning has played a critical yet much overlooked role at every St. Anthony’s Triathlon since 1992. She has carefully applied numbers to the physiques of triathletes in the pre-dawn hours – both for the Olympic and Sprint races on Sundays and the Meek & Mighty event on Saturdays – serving as captain and coordinator of the world-class Triathlon’s body-marking crew. It’s a job she enjoys – and approaches with the highest of standards.

“What’s not fun about writing numbers on people in amazing shape?” she says with a laugh. “Seriously, it’s very important, because when the numbers are applied clearly and legibly, it helps the announcer identify them correctly as they come down the final stretch. So, I take a lot of pride in it. When I’ve looked at photos of the race in the paper, I’ll sometimes think, ‘Oh, I wrote that number!’”

Lanning is part of a deeply rooted Triathlon tradition – volunteering. And with the 39th race weekend approaching, April 29-May 1, event organizers are calling for approximately 1,000 volunteers to assist the athletes who will swim, bike and run along St. Petersburg’s waterfront course.

“We are excited to welcome so many competitors to the area for the Triathlon this year,” said Patrick McGee, Triathlon race director. “We certainly look to our tremendous volunteers to help us make this a successful event. Debi has been an integral member of our volunteer team and we’re so glad she’s back this year.”

They will help out at a variety of areas, including athlete check-in, bike check-in, finish line duty, hydration stations throughout the course, transition areas, merchandise sales and, of course, athlete body marking. Since the Triathlon began in 1983, volunteers have been integral to the success of the event and anyone interested can sign up by clicking here.

Lanning, who is physician relations/CME coordinator for medical staff services at St. Anthony’s Hospital, started out volunteering to work the finish line in 1990 –seven years after the race’s inception and two years after the birth of her daughter, Cally. There she would cheer on and assist exhausted athletes as they crossed the finish line.

She liked being close to the action, but eventually decided to seek out a new volunteer opportunity. As it happened, triathlon organizers needed someone calm under pressure to direct the crucial body-numbering efforts on both race days. They had noticed how well Lanning engaged the athletes in such a comforting, positive manner at the finish line and suggested she try her hand at body marking. Interacting with – and often reassuring jittery athletes – has been the part of the body-marking job she likes the most: from experienced triathletes to the nervous children participating in the smaller Meek & Mighty event.

“A lot of the young kids are scared, so you just do your best to joke with them, calm them down, and remind them that it’s all about having great fun,” she explains. “I remember one Meek & Mighty where a woman in her 70s raced with her 92-year-old mother – and the mother finished the race. It was such an honor to write their numbers on them.”

As the St. Anthony’s Triathlon has evolved and grown over the years, so has Lanning’s number-applying strategy. In the 1990s, she remembers, many men wore speedos and shaved their legs, so it was no trouble finding places to write numbers. Early on, she even downloaded images of male and female figures to illustrate where numbers could be applied on their bodies to be most visible to cameras.

That became part of a handout she made for her body-marking helpers, complete with step-by-step instructions – such as how to use the fattest part of the marker head, not the tip; and don’t make “medical sevens” because they look like fours. But the trend eventually shifted to include spandex pants and other athletic ware, such as compression stockings that come up to the knees – meaning less exposed skin for numbering. “You had to be a lot more creative in finding places to mark,” she says.

When the Triathlon shifted to decal numbers a few years ago, Lanning thought her time as a body marker had come to an end. But her deft hand and personable style has remained in demand. While decals largely have replaced permanent markers in the big races on Sunday, black ink pens are still used on Meek & Mighty participants. Some serious triathletes still prefer the handwritten numbers. In addition, pens are utilized for touch-ups if part of a decal gets torn off.

Lanning always endeavors to instill the same sense of pride she feels in her often young and inexperienced body-marking volunteers. “I tell the crew, especially on Sunday, that these folks are coming from all over and that, ‘You are the face of St. Petersburg’ so welcome them and make them really feel like we appreciate them being here!’ I tell the volunteers how important this day is to the athletes, so we want their number to be visible and as neat as possible. It’s my little pep talk.”

In case of less-than-ideal execution, there’s always rubbing alcohol on hand to erase a mistake and start over. Lanning enjoys working with the volunteers as much as the competitors. Though she’s not an athlete herself, she’s grown accustomed to all the long periods of standing and squatting to apply numbers at odd angles. And Cally, who was just a toddler when Lanning started, has long been one of her regular assistants at the race when not tied up working as a nurse.

That’s been a genuine highlight, along with such events as the 2000 St. Anthony’s Triathlon, which served as a qualifier for the first-ever triathlon in the Olympics, held that year in Sydney. “It was amazing to meet those athletes – and write their numbers on them – and then see them compete in the Olympics,” Lanning said. “It was a great achievement for St. Anthony’s – and very exciting for me personally.”

It was just one of many moments – on many bodies – that Lanning has left her mark.