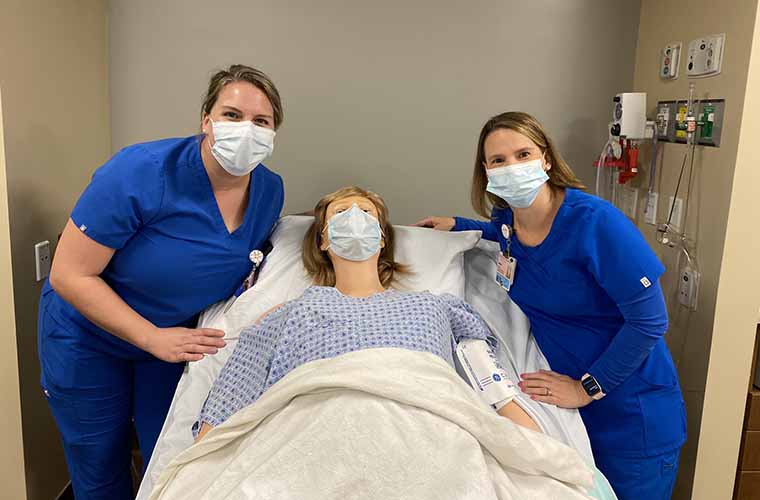 When Labor & Delivery nurse Bri Gibson, left, was confronted with a high-risk delivery, she was well prepared as she had recently practiced it on a birthing manikin during simulation training under the guidance of Sarah Colton, nursing professional development practitioner at Morton Plant Hospital.

Bri Gibson remembers the scenario vividly. A relatively new Labor and Delivery nurse at the time, she can still picture the details and emotions the first time she faced a delivery with a prolapsed umbilical cord.

It’s an emergency situation, causing decreased blood flow and oxygen to the baby. Teams literally sprint to the operating room to deliver the baby safely by C-section.

“Every second matters,’’ she said. “It’s called decision to incision, and it’s all supposed to happen in five minutes or less. It’s just go. I remember who was in what role. I remember the patient. It went so smooth. We had the perfect outcome.’’

Though Gibson never had experienced this type of emergency before – she says it might happen once a year – it was not unfamiliar to her. A few weeks earlier, she had practiced it under the guidance of Sarah Colton, nursing professional development practitioner at Morton Plant Hospital.

Colton was instructing teams from Labor and Delivery, NICU and respiratory therapy. The star of the class was Lenah, a high-fidelity birthing manikin that can simulate a wide range of events from early pregnancy complications to high-risk deliveries to post-partum emergencies.

The idea is to create a scenario as close to real life as possible, in the same rooms, with the same equipment, with the same teams. And an unbelievably life-like manikin.

“Its fake cord feels like a real umbilical cord,’’ Gibson said. “It has a placenta. You can hook it up to a fetal monitor and program the heart rate to drop just like it would. You practice in a friendly way. You can pause, touch, slow down to ask questions. There’s no fear of harming the patient.’’

When her real-life emergency unfolded, she was prepared, calm and confident.

And that’s the beauty of simulation. 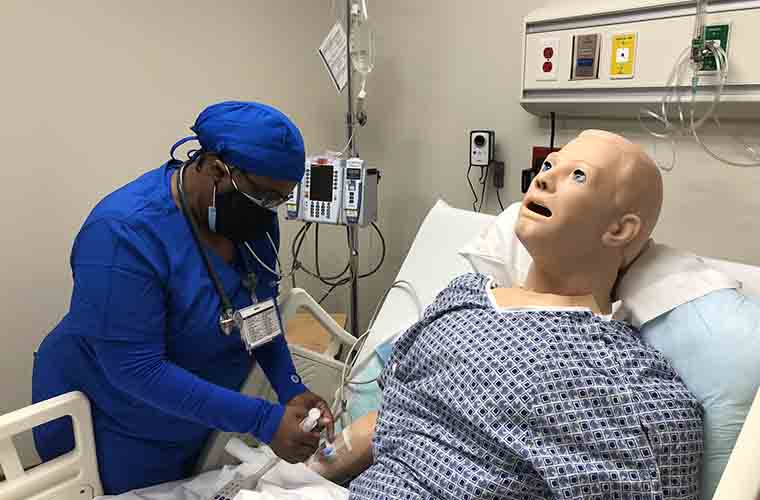 Cynthia Elmore, an LPN at St. Joseph’s Hospital-South, had her critical thinking put to the test during a congestive heart failure scenario with a high-fidelity manikin at the simulation lab in the Sally L. Bailey Education Center.

Education through simulation takes on many forms in BayCare’s hospitals, whether it’s unit-specific with experienced teams on the floors or in the classroom with new LPNs. Educators emphasize critical thinking, encouraging team members to use all their resources, ask questions and decide what intervention is needed.

“Simulation is an excellent tool in a safe learning environment,’’ said Deb Covert, director of nursing development in the West Region. “You take what you’ve learned in a book and apply it to real-life situations in a controlled setting. It’s a vital part of education.’’

Two years ago, BayCare hired Michelle Wright as an advanced professional development practitioner to lead the simulation program. Her pride and joy is the simulation lab in the Sally L. Bailey Education Center across the street from Mease Dunedin Hospital. And for good reason - there’s nothing like it in BayCare.

In general, the higher the fidelity, the more sophisticated the manikin’s capabilities and the more life-like it appears to be.  For example, the medium-fidelity manikins are more anatomically correct than a low-fidelity manikin. A trainee can take its blood pressure, start an IV and listen to lung and bowel sounds. Instructors can run different scenarios through a tablet. Some medium-fidelity manikins even talk, pre-recorded to say things such as “I have pain,’’ “I’m short of breath,’’ or “I’m nauseous.’’

High-fidelity manikins take it a step further. They can blink. Their chest rises up and down. Their pulse is palpable. They’re connected to a monitor that can display EKG, pulse oximeter, blood pressure, arterial wave forms, pulmonary artery wave forms and more. Procedures can be performed on the manikin and it responds, creating a high level of realism.

“They physiologically react to what you do,’’ Wright said. “When you do something to them, they respond like a real person. The trainees see the consequences of their actions, good and bad.’’
Naturally, the price takes a jump from model to model. Depending on packages added to the base unit, low-fidelity manikins can go for $2,000-$3,000, medium fidelity $8,000-$9,000, and high fidelity from $50,000 all the way up to $100,000 for the birthing manikin Colton used to teach Gibson.

The bounty of manikins and the renovated and upgraded simulation lab would not be possible without the generosity of Morton Plant Mease Health Care Foundation. A $1 million grant funded the sim lab alone.

Wright uses the lab primarily for assessing new LPNs during their internship. Classes are scheduled each month through the end of the year. During the class in February, Wright had adult Hal set up in Patient Room 1 and watched intently from the control room through a two-way mirror. She was running a congestive heart failure scenario. Cynthia Elmore, an LPN in the ER at St. Joseph’s Hospital-South, was one of the trainees.

Hal, or Charlie Donaldson as he was called in the exercise, had come into the ER with shortness of breath, fatigue and swelling of the feet and ankles. Elmore did everything she would have if Charlie were a real patient. She asked the appropriate questions, gathered data, took vital signs, and when his breathing worsened, she called a doctor (played by Wright). She administered an IV push medication – her first experience with that – and continued to monitor the patient as well as interact with his daughter (played by a clinical educator).

After the session, there was a debrief, as always, to assess what went well and not so well. It’s a time for the trainee to reflect, review and discuss what happened during the simulation.
“This is where the learning occurs,’’ Wright said.

Elmore, though nervous during the simulation, found the experience valuable.

“The school’s manikin was not as lively,’’ she said. “This one you hear breath sounds, heart, pulse. It helps make it more like life. It could be a real person. The practice reinforces what we learned in school. It helps it to be more fluid when you’re in a real situation. You won’t stop to think.’’ 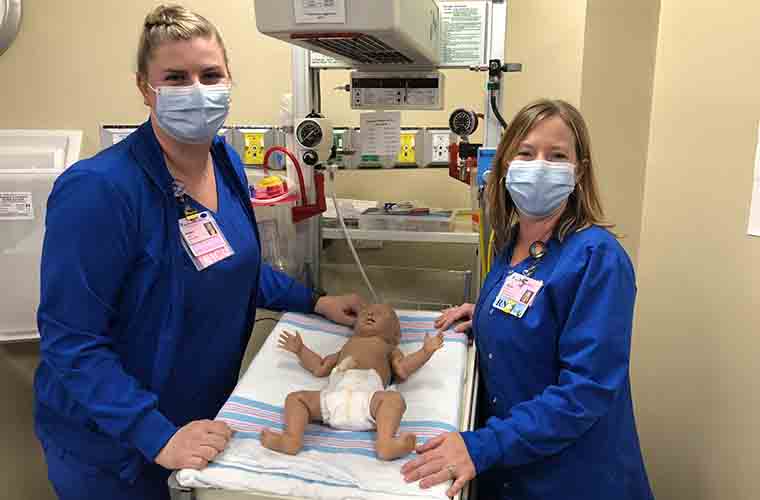 High-fidelity manikin Super Tory can do just about anything a real baby can do, which makes her an excellent training tool for Sarah Tyrell, right, nursing professional development practitioner at Morton Plant Hospital, and Amber Kyzer, clinical nurse resident.

It can be challenging for nurses to travel to attend in-class training, and the high-fidelity manikins at 150 pounds of dead weight are difficult to transport for training on the units. One other option is an iSimulate, a device that simulates a patient monitor and comes in three levels of sophistication. The monitor can show blood pressure, heart rate, breathing, labs and X-rays. The educator controls the monitor with an iPad, programming different scenarios to assess how the nurse reacts.

All regions in BayCare conduct simulation training in some form, but the level varies depending on their resources. St. Joseph’s Hospital has one pediatric and two adult high-fidelity manikins, and all West Region hospitals have high-fidelity and medium-fidelity models. All regions have task trainers, essentially part of a body used to practice skills such as IV starts and foley insertions.

Manikins are especially helpful in obstetrics education, as Gibson’s scenario with the prolapsed umbilical cord illustrated.

The Super Tory manikins, a marvel of high-tech simulation, are used by the NICU and Mom-Baby teams.

“It has 20 heart rhythms, heart sounds, lung sounds, bowel sounds,’’ said Sarah Tyrell, nursing professional development practitioner at Morton Plant. “It can cry, grunt, turn blue. You can start an IV on it, intubate it – pretty much anything you can do with a baby coming to the NICU, including all the more intensive things.’’

“The possibilities for training are endless,’’ Covert said. “It’s in the imagination of the educator to develop what can be done.’’

And that’s the beauty of simulation.