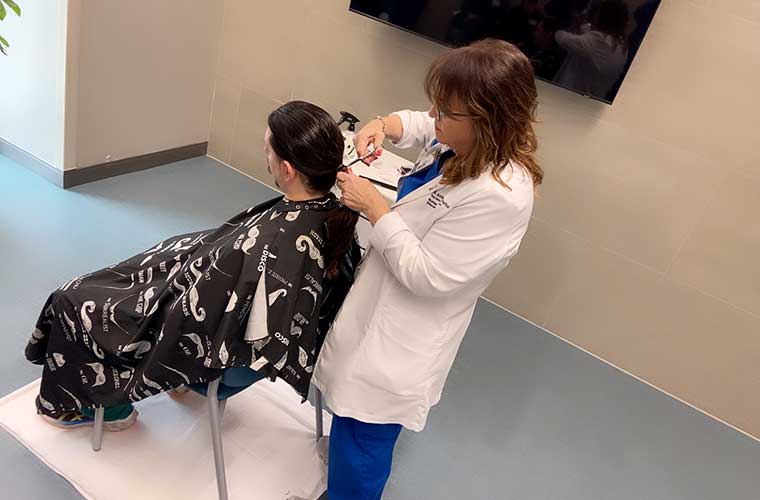 After placing the ponytail in a couple of rubber bands, Beth Eschenfelder, St. Anthony’s Hospital oncology nurse manager, starts to snip Oscar Guerrero’s hair for his donation to an organization that supplies wigs to children suffering hair loss.

For two years, Oscar Guerrero has not had a real haircut.

As his hair grew longer, Oscar, the St. Anthony’s Hospital oncology department secretary, would wear it in a ponytail or tuck it behind his ears as it flowed down his back. “My barber would trim the tips to prevent split ends,” he said. “I use an old remedy cocktail from my grandmother (mayonnaise, olive oil, one egg), slather it on and wrap it in plastic wrap to help my hair every six months.”

When his ponytail recently reached about 10½ inches, he knew it was time for a cut. For the last two years, he has been growing his hair to donate to an organization that supplies wigs to children suffering hair loss.

This is the third time Oscar has donated his hair for the cause. His first was in 2009, and then 10 years later in 2019. “I just donated my hair the first time because my family thought it was getting too long,” he said. “I like donating because the organization is known for helping so many children.” 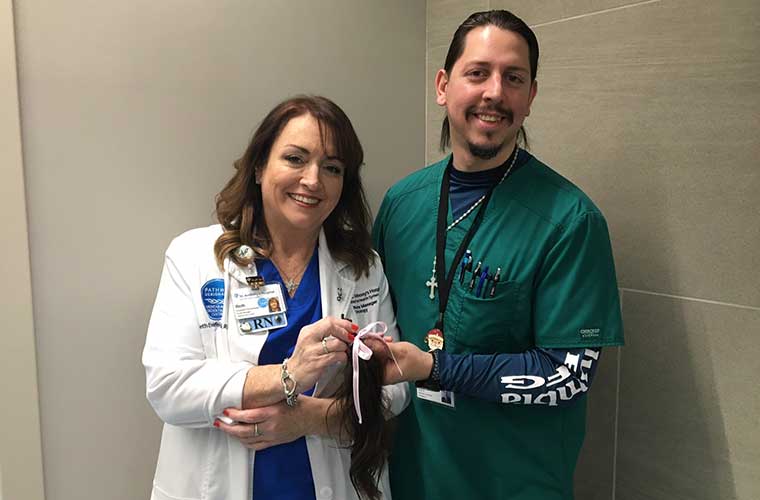 After cutting Oscar Guerrero’s ponytail, Beth Eschenfelder tied it with a pink ribbon to donate.

Oscar, a team member at St. Anthony’s for about six years, didn’t want just anyone to cut his hair. Instead, he turned to Beth Eschenfelder, St. Anthony’s oncology nurse manager to do the honors.

Beth, who was a hairdresser for 16 years before becoming a nurse, was more than happy to do it. In fact, she has cut ponytails that were going to be donated many times. But this was only the second team member whose hair she has cut for donation in her 21 years with BayCare.

“We see how the loss of hair impacts people and their self-image,” Beth said. “I’m happy to help in any way that I can.”

Beth set up a makeshift salon on the sixth floor of the hospital’s new patient tower. She put a drape over Oscar, just as she would any of her other customers, and began to carefully comb his hair. She placed one rubber band in his hair and then another.

“It’s the mistake that some stylists make when they are cutting a ponytail,” Beth said. “You need that second rubber band so that the hair doesn’t just scatter and fall to the floor.”

After putting in the rubber bands, Beth took out her shears and started to snip. She gently worked at it for a few seconds until she held the ponytail in her hand. Beth tied it with a pink bow and showed it to Oscar and the other oncology team members who joined to cheer them on.

“I am absolutely thrilled to have a team member that is willing to do this being that we are an oncology floor,” Beth said.

Although he won’t personally know the child who will get his hair as part of a wig, Oscar is happy to do it. And he plans to donate again.

Oscar hopes that his donation will encourage others to do the same. “I like donating my hair because it has a real purpose behind it,” he said. “I think there are team members who would like to donate their hair to help others.”