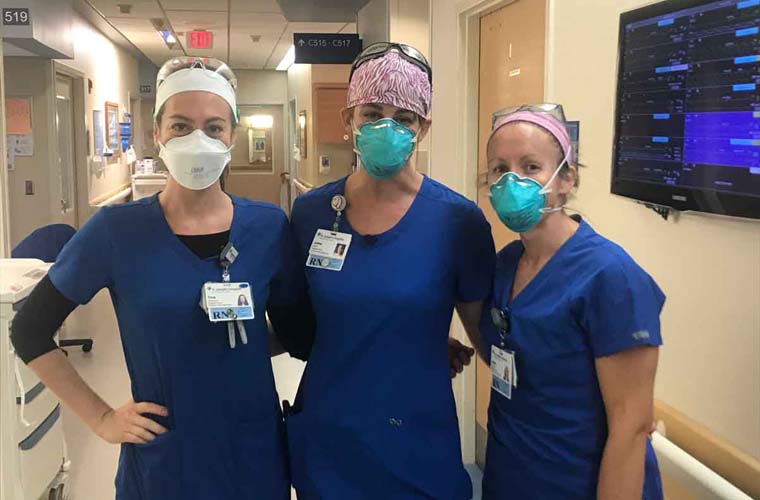 Jaime Lillo’s alarm rings at 4:30 a.m. She wakes up, heads to the gym and swims laps before starting her 7 a.m. shift in the medical intensive care unit (MICU) at St. Joseph’s Hospital.

Jayce Elliott meets with a group of runners around 5 a.m. for early morning miles before heading to the MICU.

Tina Geiger lets herself sleep in before work – but she’s no less committed to training. A few times a week she takes her bike to trails around Tampa Bay, where she puts on an audiobook and puts rubber to the road.

For more than two years, Jaime, Jayce and Tina have been on the front lines of the pandemic as nurses in a COVID-19 unit at St. Joseph’s Hospital. On May 1, these three friends will embrace a new challenge: competing in the St. Anthony’s Triathlon Olympic Relay.

It’s a goal some 18 months in the making.

“After COVID first peaked, we were trying to destress and do something outside of work and home,” Jaime said. “We realized we could compete in this event as a team because we each had our strengths. We started training and we were able to inspire each other to train harder.” 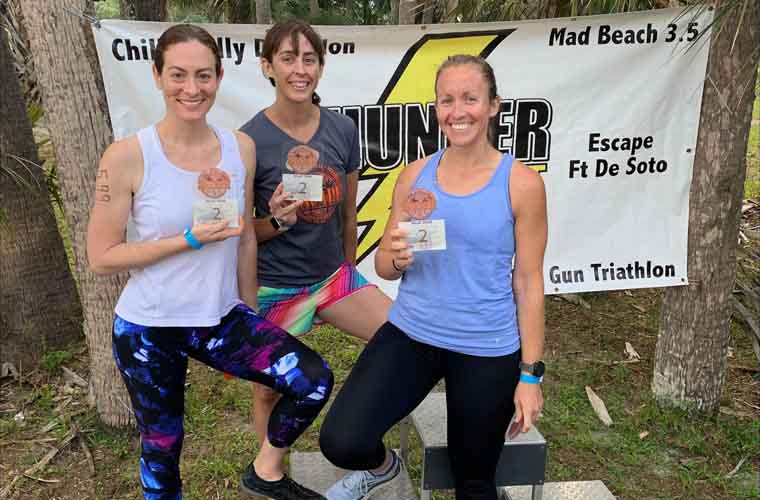 Jaime, Jayce and Tina competed in a sprint triathlon at Fort De Soto. "It felt kind of like a warmup,” Jayce said.

After the 2020 St. Anthony’s Triathlon was canceled, Jaime, Jayce and Tina decided to compete in a sprint triathlon at Fort De Soto. It was their first time competing as a relay team. And although the event was uplifting, it left them wanting more.

“It felt kind of like a warmup,” Jayce joked. They set their sights on the next St. Anthony’s Triathlon.

They turned to each other for motivation. Jaime texted her swim times, distances and routes to the group chat. Jayce challenged others to take the stairs instead of the elevator to their unit on the fifth floor of the critical care tower. Tina upgraded her bike and equipment in preparation for the big race. After so much time surrounded by COVID, working together toward this goal felt like a salve for their bodies and minds.

“The race has given us something positive to talk about and think about instead of COVID,” Tina said. She added that after all they’ve been through together – from the frontlines of a pandemic to training for a triathlon – the three of them have grown incredibly close. “You can't work through COVID like we did without feeling like your unit is your family,” she said.

The team rented a place in St. Petersburg, where they’ll stay the night before the race. They’ve started to look at triathlons in other cities, too, where they can compete while on vacation. Jaime even wants each of them to commit to finishing a whole triathlon at a later date – completing each leg themselves.
Jayce and Tina are self-assured.

But for now, they’re focused on the race ahead.