Surgical Techs Are a Vital Part of Operating Room Team 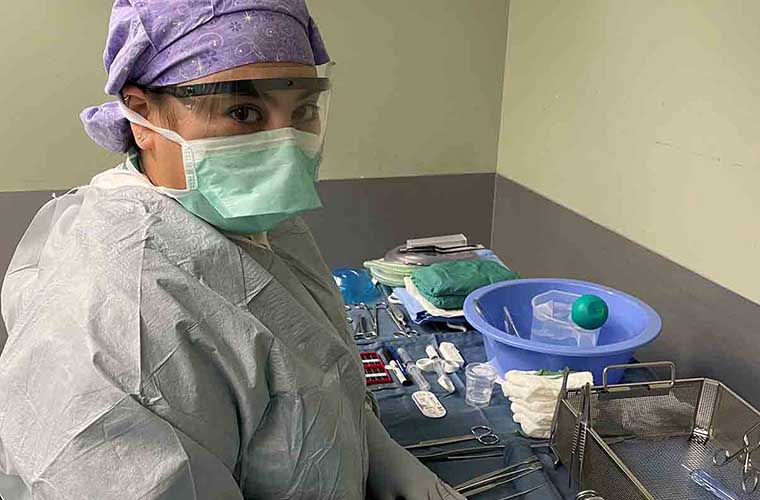 Surgical Tech Eliani Acevedo is an integral part of the operating room team.

Some things are meant to be. When contemplating a career, Eliani Acevedo initially wanted to be a nurse. The wait time to get in the program at Keiser University was 2 ½ years, though, and that wouldn’t work. She needed a Plan B.

She was intrigued by surgery and had a cousin who was a surgical tech. She began researching the job, and it sounded like a perfect fit.

“I thought it would be a good job to put my foot in the door somewhere and go from there,’’ she said. “It was the best decision I ever made.’’

“To run an efficient and safe OR, you must have a well-developed team, and the surgical tech is at the center of that team,’’ said orthopedic surgeon Christopher Grayson, MD.

Sept. 19-25 is a week of appreciation as National Surgical Technologists Week will be observed throughout BayCare.

Embarking on a New Career

After receiving her associate degree, Acevedo was hired at Mease Dunedin in February 2019. It’s been an exciting time in her life, immersing herself in her new career and at the same time getting married and having a baby. Nathan will be 7 months old on Sept. 21.

Acevedo has been growing up with BayCare, and her Mease Dunedin team has embraced her.

“Mease Dunedin is a family, and Eliani is a truly loved member of the family,’’ said Laurie Anderson, nurse manager for surgical services at the hospital. “The surgical services team threw a very special baby shower for her, and everyone watched out for Eliani as her baby-bump grew. We now enjoy celebrating all of the baby’s milestones.’’

Acevedo, 25, is one of eight permanent surgical techs on the Mease Dunedin team along with four from the mobile pool. Starting out of school, she had to learn all surgeries and become familiar with all service lines. Orthopedics accounts for 80% of the surgeries at the hospital and by sheer repetition has become her area of expertise.

“When she started at Mease Dunedin, she was brand new,’’ said John Pollard, director of surgical services. “Now she’s one of the top joint techs, performing at a very high level.’’

Orthopedic surgeon David Whiddon, MD, agreed. “It has been fun to watch her transition from brand new to one of the leaders amongst her peers.’’

Surgical techs, or scrub techs as they’re sometimes called, are integral to every aspect of a case. In pre-op, they prepare the case cart, gathering, counting and arranging the instrumentation needed for surgery. They make sure everything is sterile and set up the towels. If a robotic surgery is being performed, they calibrate the robot, check the range of motion of the arm and make sure its abilities are 100%.

All techs are trained to pass instruments during surgery. They have to know the procedure step by step and anticipate the surgeon’s needs. Acevedo is particularly adept at this.

“She is extremely competent,’’ Dr. Grayson said. “She is always a step ahead of the procedure and prepared no matter how complex the case is.’’

Techs count sharps, sponges and instruments before surgery and again before the dressing is put on the patient. Post-op responsibilities include taking the instruments to decontamination and getting the room ready for the next surgery.

Repetition alone doesn’t explain Acevedo’s success. From the beginning, she’s been diligent and determined, a voracious learner. When she first started with the team, she took meticulous notes after surgery and would go home and repeat the steps out loud. She also jotted down small notes on the back table where there were labels and marking pens, and after surgery took pictures of the notes.

She works two days a week with Dr. Whiddon and two with Dr. Grayson, mostly doing total hip and knee replacements. One day a week is reserved for revisions, the toughest part of her job, she said, because the cases can be long.

It’s been a challenge juggling work and being a new mom, as one might expect.

“Especially in the beginning,’’ Acevedo said. “Nathan is a great baby and sleeps through the night, but I was extra tired at first, especially after the longer shifts. My work family has really helped. I’m on call less, and if the work is done, I can go home early.’’

During the COVID-19 pandemic, elective surgeries such as hip and knee replacements have been paused on a couple of occasions to free up beds and redeploy staff. Acevedo said she helped as a sitter, took vitals in the ER, assisted with bathing a patient or taking a patient to the bathroom – anything that was needed on any floor.

As elective surgeries begin to resume, she has one eye on the future. She’s considering two options.

She’d like to become a Physician Assistant. For that she would need to get a bachelor’s degree and complete two years of PA school. She has applied for an Earn As You Learn Scholarship through BayCare, which would allow her to continue working while going to school. If she chooses that path, she would probably start school in the spring.

Another option is to become a surgical first assistant, which is similar to a surgical tech but more active in surgery. They can do anything under the scope of the surgeon and might close an incision or apply dressing to the patient, for example.

There’s a six-week program to become certified and two weeks of training after that.

Whatever Acevedo decides, she knows she’s in the right place at the right time to pursue her dreams.

It was meant to be.