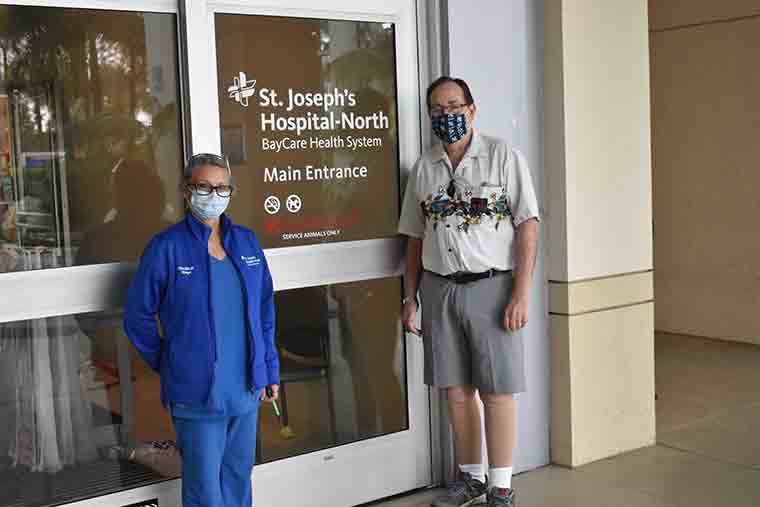 A beautiful painting is displayed prominently in a team member common area on a floor of St. Joseph’s Hospital-North in Lutz. The painting is a spring nature scene with trees, flowers and a small footbridge over a brook.

Looking closely at the painting, there is a small, gold plate attached beneath the painting inscribed with these words: “A Bridge to Recovery. To staff on 4 West for saving my life.”

The painting was done by COVID survivor Robert Sakoff as a gift to the unit. Robert was admitted to the hospital for COVID on February 7 and discharged 16 days later on February 23.

“I feel 120 percent,” said Robert, 74, originally from New York but now residing in Tampa’s Northdale section. “My lungs are telling me otherwise but from where I’ve been my recovery has been amazing.” 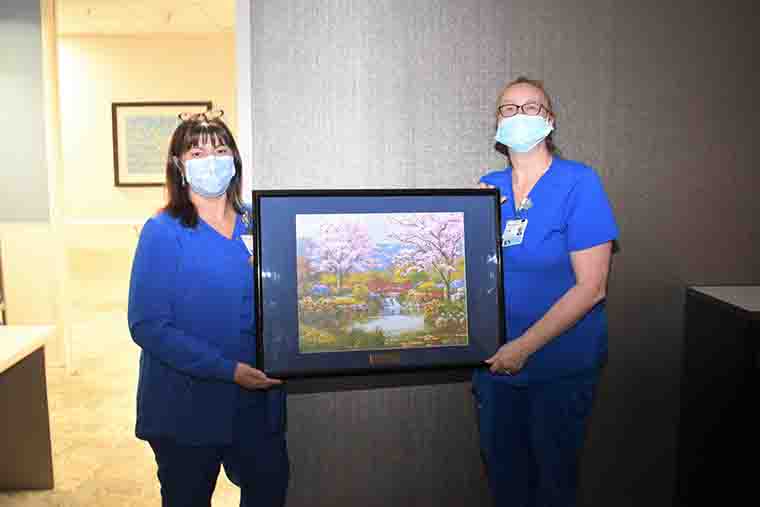 Nurses Lisa Cotroneo (left) and Bridget Farnsworth holding Robert Sakoff's painting
He described his battle with COVID during his early days in the hospital as being serious and “on the brink.”

But as he began recovering from COVID and feeling better while in his room, he started the painting. He dabbles in painting as a hobby. Mary, his wife, brought his painting supplies to the hospital entrance where team members brought the supplies to his room.

“It was kind of boring being by yourself,” he said. “It was lonely, you couldn’t have family or visitors, so I started the project of this painting. Instead of sitting in bed and watching TV all day, I took my time and worked on it. It took hours in the day and it also helped my recovery because mentally it helped me focus also.”

He eventually completed the painting of the park scene with the bridge after he was discharged. Robert said people were shocked to learn that he did the picture by paint by numbers. “When I tell them that, they go ‘Really?’” he said. “It’s not the old school paint by numbers anymore. It’s a quite different way of doing paint by numbers than in the past.”

He said he was pleased the way the painting turned out and gave it to the hospital to say thanks to the floor. 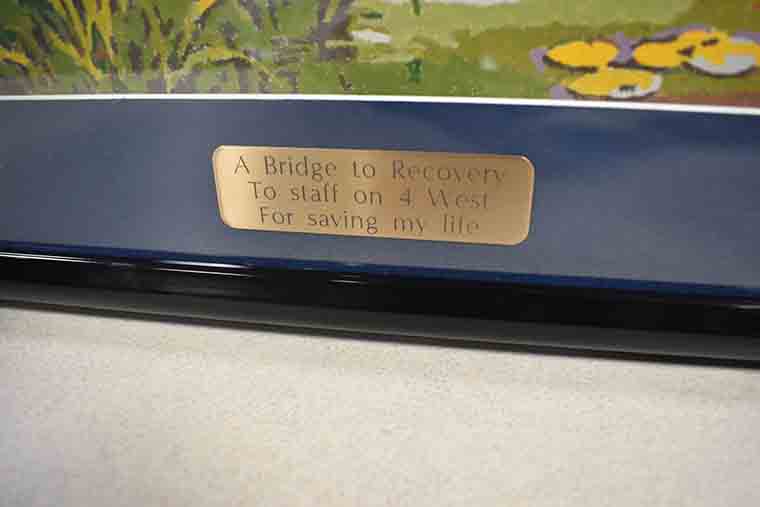 “I dedicated the painting to the people on 4 West” Robert said. “The care that I received there was amazing. The people were amazing, they’re friendly, they’re efficient. In my gratitude, I finished the painting and wanted them to have it. The painting was a park scene with a bridge so I titled it ‘A Bridge to Recovery.’”

The impression left on him about St. Joseph’s Hospital-North was stellar. He said the experience was “sort of like being on a private vacation except without visitors.” He cited quality food and listening to the classical music on his room’s Amazon Alexa entertainment device as pleasant amenities. Mary was also impressed that the security guards knew her by name each time she stopped at the entrance to drop off items for him. Although he couldn’t have visitors, he was able to Facetime with his family using his own Ipad.

“The entire staff, the day nurses, the night nurses, everyone there was diligent that worked to help my recovery," Robert said. "Everyone had a positive attitude. I couldn’t ask for more than what they did for me. They all helped me get back to where I am today."

"Our team is so appreciative of this gift," said Ellen Normandin, a St. Joseph's Hospital-North nurse manager.  "The painting is so beautiful and serene.  I often see members of the team stop to enjoy the colors in the painting or to point it out to people who visit the unit."

"We know the amount of creativity and work that went into creating this painting as we had the opportunity to watch Mr. Sakoff at this work while he was a patient here," Ellen said. "We were so surprised when he returned to gift us the painting.  One team member refers to the painting as a bit of tranquility in a place that can be a bit chaotic at times."