Difficulty Understanding Your Child? Apraxia of Speech May Hold Answers 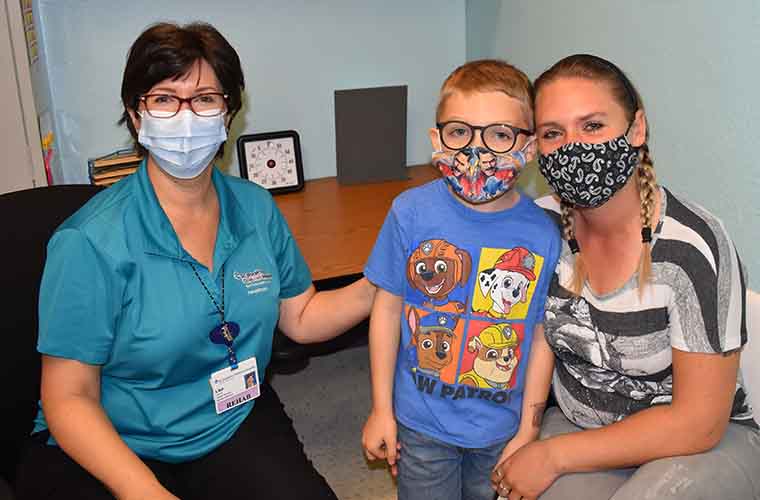 Lisa O’Hanlan, speech language pathologist, pictured here with Allen Walker and his mother, Tanika Six, says that it’s important for parents to be partners in therapy because they must know how to work with their child at home to facilitate the best outcome.
Allen Walker is just like any other active little boy. He loves to play with his T-ball set and kick his soccer ball around. He likes to bounce on a trampoline and attend Tae-Kwon-Do class. And of course, he likes his video games.

There was just one thing. “He was quiet,” said his mom, Tanika Six. “He would try to make sounds and form words when he was younger. His lips would move and he was trying to talk. But the words wouldn’t come out.”

Ms. Six just thought that he was a late bloomer. “When I was a little girl, I had a problem saying my ‘Rs’,” she said. “I thought that maybe his speech problems were hereditary. I thought he would be fine.”

One day when Allen was 3, he and his mom were at the store. “He was trying to communicate with me but I couldn’t understand what he was saying,” she said. It was then that a woman turned around and changed Allen’s life. 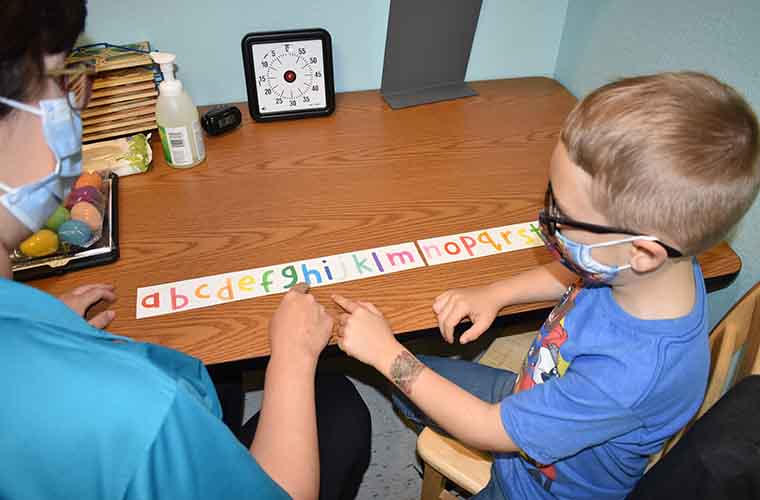 Lisa O’Hanlan, speech language pathologist, points at words as Allen Walker, 6, practices saying them. Allen has Childhood Apraxia of Speech, a disorder that makes speech production difficult for children.
Allen was screened and diagnosed with Childhood Apraxia of Speech (CAS), a neurological speech disorder that makes it difficult for children to plan and sequence speech movements.

This disorder makes speech production very difficult for children,” said Lisa O’Hanlan, one of the speech language pathologists at the brightly colored BayCare Kids offices on the campus of Mease Countryside Hospital. “Children who suffer from CAS can have difficulty even imitating sounds and simple words. It’s like the message from the brain to the mouth is interrupted.”

According to the website, Apraxia-Kids.org, apraxia is diagnosed in about 1 in 1,000 children, which is similar to the number of children diagnosed with Down syndrome. CAS is more prevalent in boys than girls and it can occur on its own or co-exist with other diagnoses such as autism or phonological disorders. May is Better Hearing and Speech Month, a time to shine a light on conditions such as Childhood Apraxia of Speech.

By 2 years old, most children have about a 50-word vocabulary and are beginning to combine words into phrases, Lisa said. If a child does not appear to be meeting the typical speech and language milestones and/or has difficulty imitating simple sounds and words, then a screening or full speech and language evaluation may be needed to determine if he or she is suffering from CAS.

“The earlier they are screened the better,” Lisa said. Treatment for CAS differs from traditional articulation therapy in regard to frequency of treatment as well as therapeutic strategies. 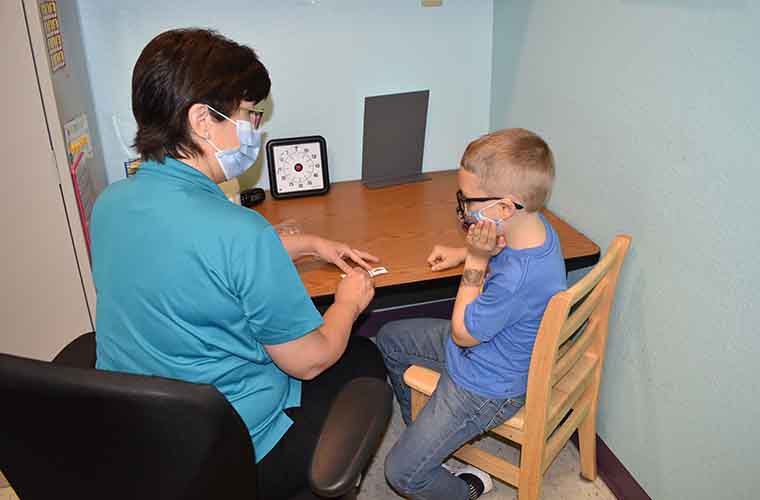 As Lisa pointed at words, Allen said each one clearly. He especially enjoyed getting special treats for his good work. “We try to make this fun for the children,” Lisa said. “So often, children learn through play.”

After an hour-long therapy session, it was time for Allen to head to school. He visits the office twice a week. Lisa adds that it’s important for parents to be partners in therapy because they must know how to work with their child at home to facilitate the best outcome. Ms. Six said she is grateful that he also attends speech therapy at school. And as Lisa said, she works with him at home.

Children diagnosed with apraxia can vary regarding the severity of the condition. For those with severe to profound CAS, the treatment for some children may rely on the use of augmentative communication such as a tablet that displays the words they want to say. Other children with milder forms of CAS can eventually achieve clear, intelligible speech.

The ultimate goal is to help the child with CAS to communicate clearly so they can connect effectively with others thereby impacting the quality of their life,” Lisa said.

Allen is 6 now and has been in speech therapy for three years. “I know that we still have some work to do,” Ms. Six said. “But I know he has made significant progress. Before speech therapy, instead of telling me what he wanted, he would point to it. He doesn’t do that as much anymore.”

If you think your child may be suffering from CAS, talk with your pediatrician and ask for a referral to have him or her screened.  For more information on the BayCare Kids speech language pathologists and the services they provide, go to https://www.baycare.org/hospitals/mease-countryside-hospital/services/childrens-health/st-josephs-childrens-specialty-center/pediatric-speech-therapy-services.