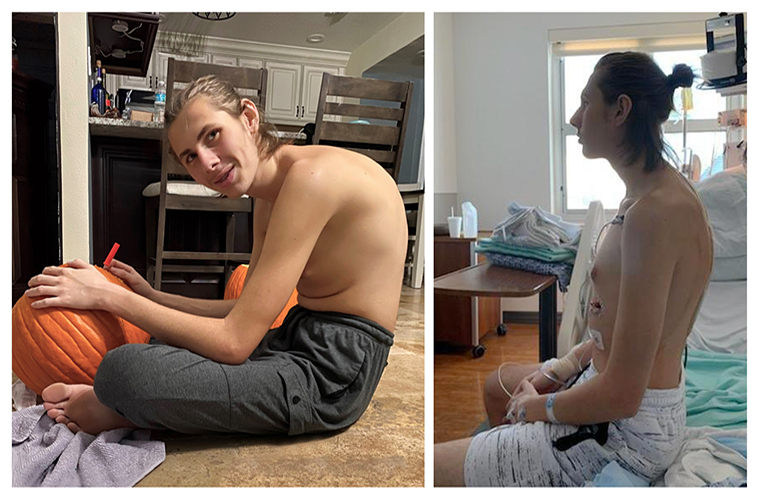 This is Bergen before and one day after the spine surgery.

When 17-year-old Justin Bergen was in 6th grade, he began experiencing pain in his neck and his spine appeared to be growing at a slight angle. Concerned, his parents took him to a family physician who suggested it was a poor posture issue and nothing serious. As the years passed, the discomfort turned into pain, difficulty eating and weight loss. Seeking a second opinion, Justin’s parents made an appointment with Dr. David Siambanes, pediatric orthopedic surgeon and medical director of St. Joseph’s Children’s Hospital’s Scoliosis Center.

“As soon as I saw Justin I knew he was suffering from kyphosis, a spinal disorder in which an excessive curve of the spine causes a bowing or rounding of the upper back,” said Dr. Siambanes. “An X-ray confirmed that he had a severe form of the disorder, known as Scheuermann's kyphosis.”

According to Dr. Siambanes, normal vertebrae in the thoracic spine are rectangular-shaped and have a soft cushion disc between each one. In Scheuermann's kyphosis, the front of several vertebrae shift forward and develop into a triangular shape. The wedge-like shape causes the spine to bend forward at a sharp angle.

“Symptoms generally develop around puberty and pain typically increases with time and severity of the deformity,” Dr. Siambanes adds. “Unlike a patient with the milder form of postural kyphosis, those with Scheuermann’s kyphosis cannot correct their curve simply by trying to stand up straight." 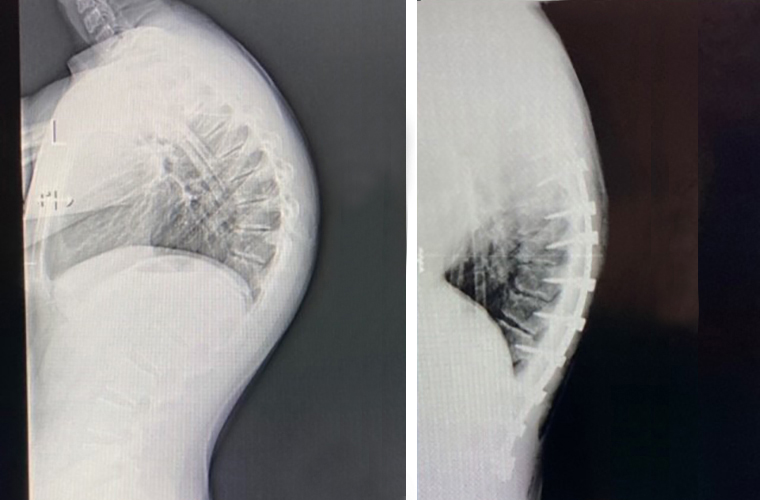 On Oct. 14, 2020, Dr. Siambanes successfully corrected the irregular vertebrae and performed a spinal fusion to prevent further curvature from occurring. Justin was discharged from the hospital five days later and within three weeks he was back to playing drums.

“I was amazed that the incision was so small and after just a month it’s difficult to see the scar,” said Justin. “But for me the best thing about the whole experience is that I no longer look different than everyone else. My self-esteem was boosted almost immediately.”

Justin’s mother, Wendy, adds that everyone from Dr. Siambanes to the nurses in the hospital did a great job making this a positive experience for the whole family.
“Justin had a lot of anxiety about undergoing surgery and being hospitalized,” Wendy said. “Everyone we encountered along the journey was so supportive and it really made a difference.”

Justin will follow up with Dr. Siambanes throughout the next year, but is expected to have a normal, healthy life free from the pain he experienced for years while living with a spinal disorder.