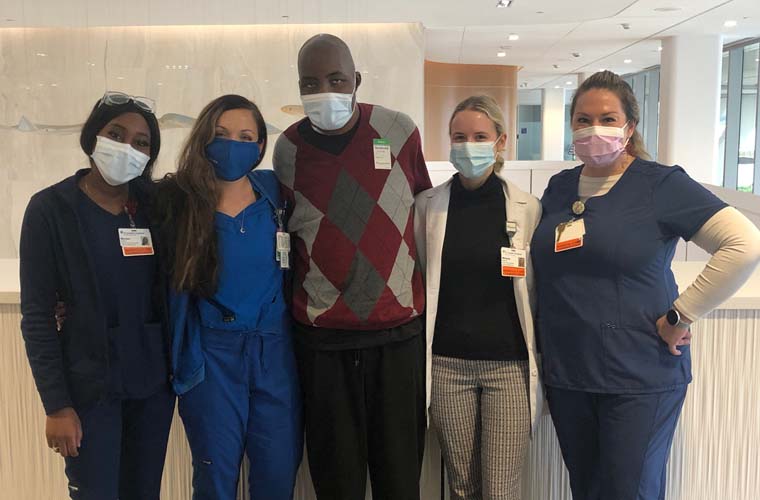 After 288 days at St. Joseph’s Hospital, Everald Nelson found a new home and new strength as a power lifter.

When 38-year-old special needs patient Everald Nelson came to St. Joseph’s Hospital in 2020, his diabetes was spiraling out of control and the damage to his kidneys caused him to go into renal failure.

For patients like Everald, being taken out of their daily routine and dealing with an unfamiliar environment can be especially difficult, so the medical team at St. Joseph’s Hospital did whatever was necessary to make sure Everald felt safe and comfortable as they focused on successfully treating both his renal failure and unmanaged diabetes. He would spend 288 days in the hospital and form strong bonds with team members before he was finally stable enough to be released.

"Nurses, techs, doctors, social workers — everyone loved Everald because of his vibrant spirit," said Melanie Marraffa, a social services specialist at St. Joseph’s Hospital who worked closely with Everald during his stay.

Unfortunately, Everald’s elderly mother passed away while he was in the hospital. For years she was her son’s loving caretaker. It was now up to St. Joseph’s Hospital to find a place to provide Everald continuing care.

"Our team worked diligently to find the right fit for Everald," said Yvette Guzman, manager of hospital care coordination at St. Joseph’s Hospital. "They've seen some tough cases this past year, but they stay positive and focused on patient wellbeing. Everald was not only a pleasure to work with, but he also became part of our family."

After researching dozens of facilities, St. Joseph’s Hospital finally found the perfect fit for Everald at the Specially Fit Foundation, a non-profit that focuses is on fitness, providing year-round workouts, Special Olympic training, nutrition coaching and mentorship for individuals with developmental disabilities.

On the day of his discharge, St. Joseph’s Hospital team members treated Everald to a going-away celebration.
As soon as he settled into his new home, Everald started a daily regimen to help build up his strength. In addition to both physical and occupational therapy, Everald followed a special cardio and weightlifting program and was soon dead lifting over 75 pounds. Most importantly, he enjoyed it.

After researching dozens of facilities, St. Joseph’s Hospital finally found the perfect fit for Everald at the Specially Fit Foundation.

“When I asked him if he wanted to participate in the Special Olympics, Everald was totally on board,” shares Mark Oliver, fitness trainer and owner of Specially Fit Foundation.
From that point on, Everald’s training kicked into high gear. In addition to building up his strength, his hard work enabled him to eliminate his insulin injections and reduce dialysis from three times a week to two.

Everald’s new fitness routine not only brought success in terms of his overall health, it also resulted in a different kind of winning. This past summer, in his first-ever Special Olympics event, Everald took home a gold medal in power lifting and is excited to soon be competing in his next power-lifting event.
In December, Everald and Mark visited St. Joseph’s Hospital. They met with social services team members like Myriam Abner, Laurel Powers, Melanie and Yvette, who took such good care of him during his long stay.

“It was so heartwarming to see how far Everald has come and how well he is doing,” said Yvette. “His case exemplifies everything our hospital stands for. I’m so proud of my team’s commitment to patients like Everald. Every day they’re fulfilling our mission to help patients recover and reach long-term health.”

Everald is enjoying life in his new home with five other residents, going on outings and working out daily. He continues to have his kidneys monitored by Dr. Jesus Navarro, and his family at St. Joseph’s Hospital loves to hear about his new home and all his accomplishments during those visits.

Seeing the success of patients like Everald reinforces St. Joseph’s Hospital’s commitment to initiatives like the BayCare HealthHub partnership which helps others like him get the training and support they need to achieve their goals and get healthier while doing it – because everyone deserves the opportunity to be special in as many was as possible.