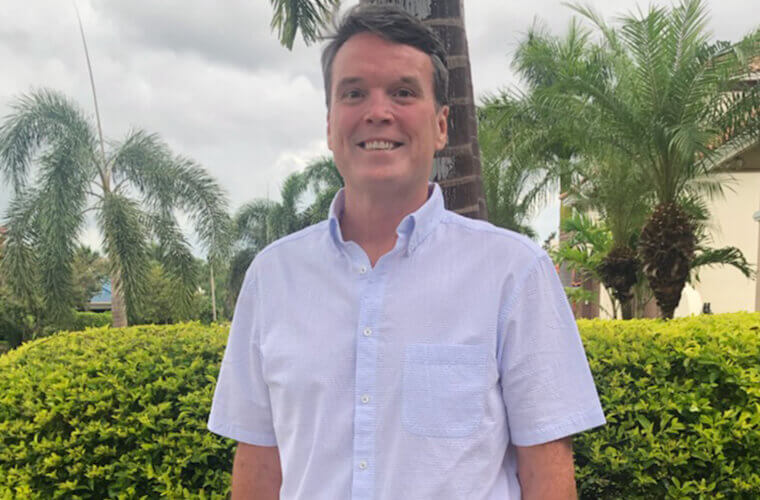 O’Farrell after his heart attack

For Sean O’Farrell, Monday, April 6 was a typical day. He had finished working in his home office in St. Petersburg and decided to take a bike ride, a 15-mile loop on the Pinellas Bayway/Skyway Bridge trail. He figured it would take about an hour and then he would be back home.

But his day was anything but typical. During the ride, he felt a slight pain in his chest but he thought it was just dehydration. “When I reached the bottom of the hill, my left arm was numb and I knew that was a sign of a heart attack,” he said.

Through the quick actions of his wife Louise, Sunstar Paramedics and the emergency services and cardiac medical teams at St. Anthony’s Hospital, Sean was able to survive what doctors told him was a 100% blockage of his left anterior descending artery, otherwise known as the "widowmaker."

“I would not be here today without so many heroes who worked so hard to help me survive,” said Sean, 58. “I am truly grateful for all that they did that day and for those who continue to help me.”

Sean and Louise O’Farrell left Grand Rapids, Mich., two years ago to move to St. Petersburg. “My wife and I honeymooned in St. Petersburg 29 years ago and loved vacationing here,” he said. “However, my wife had ovarian cancer five years ago with a recurrence two years ago. It was then that we decided to move here full time for the weather and oncology services.” 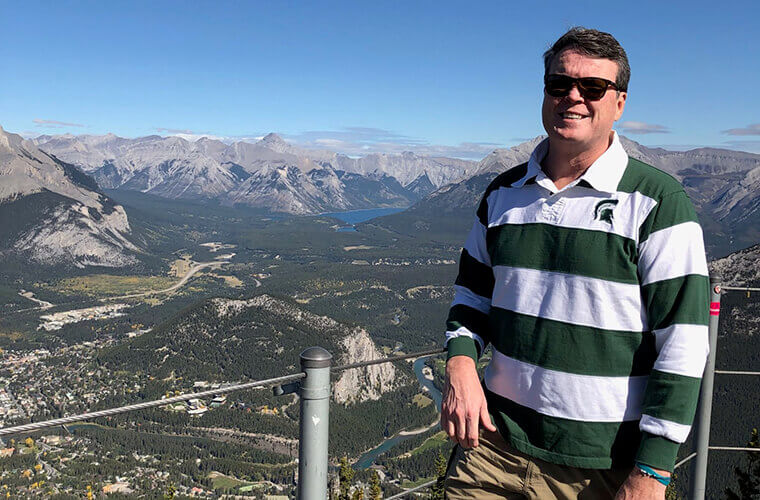 O’Farrell before his heart attack

Sean, who works in the material handling/supply chain industry as a strategist, and Louise, a retired teacher, have two adult sons. Sean had played sports in high school, wrestled in college and played rugby for 10 years after college. “Through the years, my bike riding was not consistent, but I was hoping to increase it with living in Florida,” he said. “But work gets in the way, unless there’s a pandemic. I had three weeks of biking every other day before my heart attack.”

After realizing that he was having a heart attack, Sean called Louise and asked her to pick him up. “I tried to use a calm voice but she could tell something was amiss and asked if she should call 911,” Sean said. “I said yes and to meet me at the very southern tip of St. Petersburg on the Skyway Trail.”

Sean couldn’t pedal back. He asked a person on the trail to push his bike back to where he would meet Louise and the ambulance. “The walk was nearly 3/4 of a mile to find the fence opening,” he said. “I could not walk the last 100 yards and the paramedics brought a gurney and wheeled me to the ambulance.” 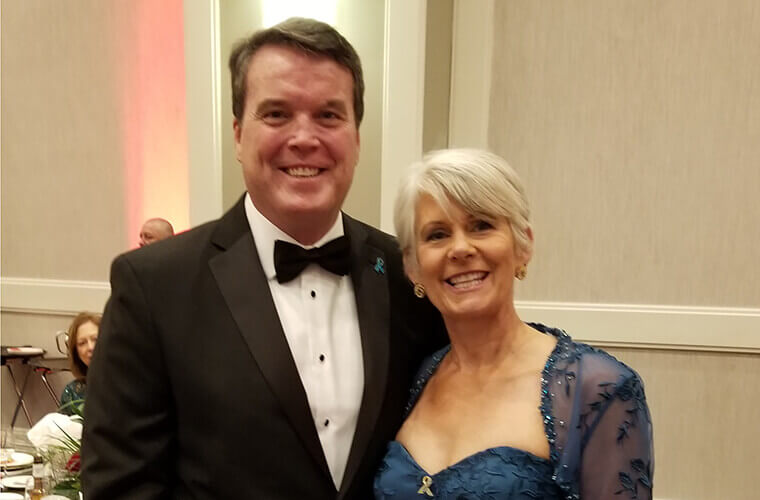 O’Farrell and his wife Louise before his health scare

As the ambulance headed to St. Anthony's with his wife following in her car, Sean said that he was able to answer about six questions from the paramedics. “Then I told them was blacking out,” he said. “When I came to, the paramedics were handing me off to the St. Anthony's emergency room team and shared that they had to use the defibrillator twice to restart my heart. This is when I learned that the paramedics had saved my life.  I could see the look of surprise in the eyes of several emergency room team members.”

At St. Anthony’s, Sean said he answered four questions before passing out again. He didn’t wake up until Thursday, April 9. He had been placed in a medically induced coma. “When I was awake and stable in the ICU, a nurse revealed that they had to use the defibrillator three more times in the ER,” he said. “Doctors told me the major concerns from the heart attack and the following cardiac arrest events were damage or scarring to the heart and its electrical system, other organ damage, and whether I had any brain damage as a result of lack of oxygen.”

Louise was not allowed to visit because of restrictions due to the COVID-19 pandemic. But she never had a second thought about calling the ambulance and taking Sean to St. Anthony’s. “This made her very anxious and more concerned because she was left with very little information,” Sean said.

“We have seen a decrease in patients with stroke and heart attack symptoms coming to the emergency department since the start of COVID-19. It is extremely important for anyone suffering from symptoms of a stroke or heart attack to come to the hospital for treatment as quickly as possible because these are time sensitive conditions,” said David Ball, DO, St. Anthony’s Hospital emergency center medical director and chairman of the BayCare Emergency Department Collaborative. “We have temperature screening at our entrances and we screen all patients for symptoms of COVID-19. We are taking extra precautions to keep everyone safe. The patient's job is to get to the hospital as quickly as possible with these time sensitive conditions because that is the key to a successful outcome.”

While Sean was in a coma, there was little information to share. But the couple were finally able to talk on the morning he came out of the coma. He was discharged from St. Anthony’s the next day.

Because of permanent damage to his heart’s electrical system, Sean had a pacemaker and defibrillator implanted. “I have been given a clean bill of health from my doctors,” he said. “With a six percent survival rate from being paddled due to cardiac arrest outside of a hospital setting, and an even lower rate of survival due to the 100% blockage of the widowmaker artery, I am considered a walking miracle.”

Looking back over the event, Sean said he never thought he previously had experienced any chest pain. But Louise said that he had complained at least once a month about chest pain in the previous six to 12 months. He also learned that his grandfather died of heart disease in his late 50s.

Sean said that his primary physician, Adam Prawer, MD, and cardiologist Jason Levine, MD, have asked him to do things in moderation regarding his diet.  “I have lost nearly 50 pounds since April 6. I watch my sodium, sugar and trans/saturated fats intake,” he said. “Both doctors said to exercise and to listen to my body if I have done too much.”

On a subsequent stay at the hospital, cardiologist Geraldo Ramos, MD, conducted an echocardiogram, heart catherization and stress test. And the St. Anthony’s cardiac rehab team have been monitoring his exercise and helping with his progress.

What stands out for Sean is how many times he has been told that he shouldn’t have survived this event. “I will always be indebted to the paramedics who brought me back to life,” he said. “The ER team brought me back to life a second time and some came to visit me a few days after treating me, with tears in their eyes, expressing their awe that I was alive. The cardiac team that worked their magic and my general practitioner who oversaw everything and continue to do so, are true heroes.

“It isn't my time to die,” Sean added. “And as my cardiologist says, ‘Either it’s the luck of the Irish that saved me’ or someone up above isn't ready for me yet’."