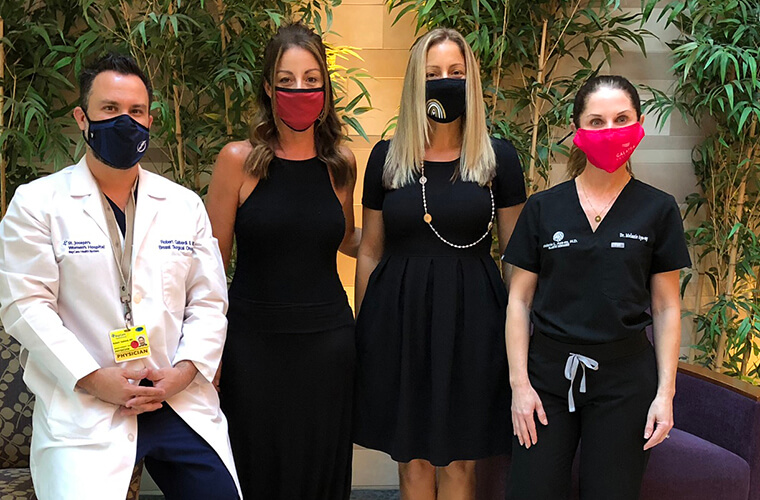 When Jennifer Rodriguez’s twin sister was diagnosed with Stage IV ovarian cancer, Jennifer naturally wondered if she might be susceptible to the disease, also. Her younger sister, Wendy Pineo, was curious, as well. After all, their paternal grandmother was diagnosed with breast cancer at age 85.

To put their minds at ease, they underwent genetic testing in May 2019. They both tested positive for BRCA1.

Everyone has BRCA1 and BRCA2 genes; however, mutations in these genes can increase the risk for certain cancers, especially breast cancer (in both men and women) and ovarian cancer in women.

“A genetic mutation happens for about 5 – 10% of all breast cancers. If they are positive, it makes them more susceptible to cancer,” said Robert Gabordi, M.D., breast surgeon at St. Joseph’s Hospitals.

Pineo and Rodriguez met with Dr. Gabordi to discuss their options. “We didn’t know about BRCA,” Rodriguez said. The more she learned, the more amazed she was that no one had ever mentioned it to them before.

According to the National Cancer Institute, people of Ashkenazi Jewish descent have a higher prevalence of harmful BRCA1and BRCA2mutations than people in the general U.S. population. The sisters’ family falls under that ethnic group. Other ethnic and geographic populations around the world, such as the Norwegian, Dutch and Icelandic peoples, also have a higher prevalence of specific harmful BRCA1 and BRCA2 mutations.

Because BRCA1 mutations are linked to both ovarian and breast cancer, Pineo and Rodriguez decided to have hysterectomies and double mastectomies to reduce their chances of developing cancer.

They began their proactive journey together by having their hysterectomies in June 2019.  After a six-week recovery period, Dr. Gabordi performed their mastectomies at St. Joseph’s Women’s Hospital. “We had them the same day and were one room apart,” Rodriguez said.

By the time the siblings were ready for reconstructive surgery, the world was in the midst of the COVID-19 pandemic. In June 2020, Plastic Surgeon Melanie Lynn Aya-Ay, M.D., performed the outpatient surgery at St. Joseph’s Hospital-North.

“We felt completely safe,” Pineo said. “Everyone wore masks and they tested us for COVID before the surgery. I had no issues, no complications and no regrets. It was the least invasive of the surgeries.”

Rodriguez agreed.  “It wasn’t that bad,” she said. “It’s definitely a personal choice.”

The sisters are back to living normal lives – as well as they can during a pandemic. Pineo teaches first grade in Land O’ Lakes, FL, and Rodriguez is working from home developing virtual STEM (Science, Technology, Engineering and Math) programs.

Rodriguez’s twin sister is doing well with treatment for her ovarian cancer and will address genetic testing when she is able. Her 20-year-old daughter tested positive for BRCA1 and will start screening breast MRI at the age of 25. Pineo’s daughter will be tested when she is 18 years old.

Pineo and Rodriguez are very passionate about telling their story to educate people about genetic testing. Rodriguez believes genetic testing should be part of a woman’s gynecological exam.  “It could be super helpful,” she said. “If more people were aware of it, we would have pushed for testing a little harder over the years.  We want to help as many people as possible to know the questions they should ask.

To learn more about genetic counseling services at BayCare, go to https://baycare.org/services/cancer/genetic-counseling.