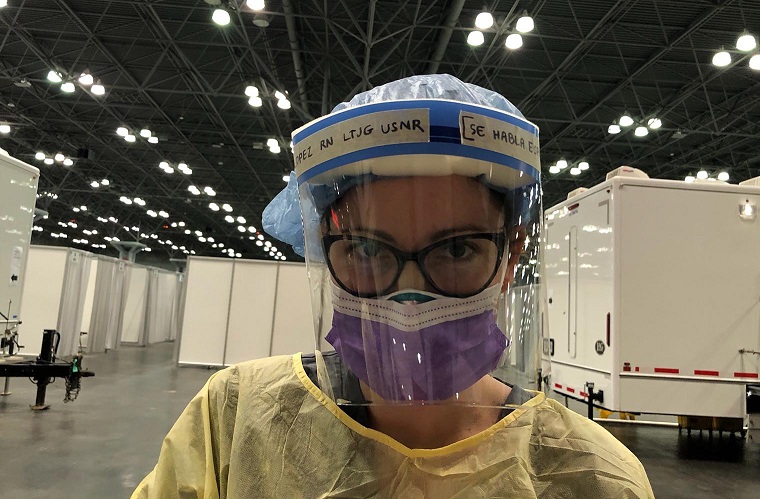 When Navy Reservist Christina Martinez was deployed to New York City to care for COVID-19 patients, one of the things she packed was her guiding principle that she follows as a BayCare nurse. “Humanity was the number one value I used,” she said.

Martinez is an advanced professional development practitioner who has worked for BayCare for 13 years. Although she is based at Mease Dunedin Hospital, Christina supports all BayCare regions and campuses with surgical services education, primarily for the perioperative internship and surgical education programs. She has been a member of the Navy Reserves for four years.

A fellow BayCare nurse and Navy Reservist, Sarah Lopez, shared the experience with her.  Lopez is an Operating Room nurse who has worked for BayCare’s Nursing Pool for about 12 years, most recently in Same Day Surgery at St. Joseph’s Hospital. Prior to becoming a pool nurse, she worked in the operating room at St. Anthony’s Hospital.

Lopez has been in the Navy Reserves for a year and a half. She also recognized the need for humanity-centered values.  “It speaks a lot of our human potential – we’re all basically the same, have the same needs.  We have an altruistic sentiment toward our fellow humans,” she said.

Martinez and Lopez arrived in New York City on April 7 to a ghost town.  “When we first arrived, it was in complete lockdown,” Lopez said.  “It was weird.”

They were deployed to the Jacob J. Javits Convention Center in Manhattan where the Army Corps of Engineers had set up a field hospital. Normally a field hospital is set up in tents in disaster areas.  In this case, because they were indoors, they were able to establish a state-of-the-art facility, including an ICU, that could accommodate 2,500 New York citizens.

Initially, it was thought that the Javits Center would receive non-COVID patients who could not be placed in a hospital. That quickly changed and they began to take convalescent COVID patients, meaning that they were progressing well enough to be transferred out of a hospital to open up beds for more acute patients. 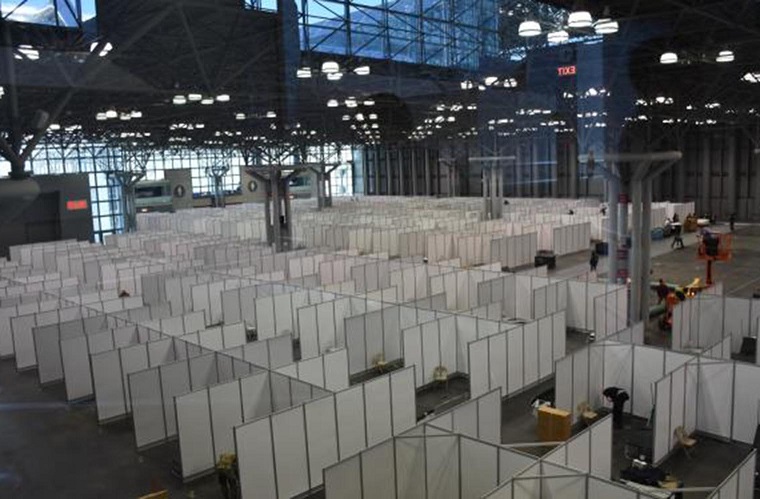 Lopez described the Javits Center as a huge open warehouse. “Within a short period of time, the Army was able to build structures to create rooms, each separated by sheets, with a fourth wall to come in and out,” she said.  Each space had a cot, a chair, an oxygen machine, a monitor and a small cardboard trash can.  Each space could be modified, depending upon what each patient needed.

Nursing stations were in a pod system with an assigned team. Fortunately, Martinez and Lopez were in adjacent pods.  During their first couple of weeks in New York, they worked 13-hour shifts, seven days a week, with about 12 patients on each shift.  As reinforcements arrived and volumes went down, shifts were tapered.  In a little over a month, about 1,200 patients were treated at the Javits Center.

“Christina and I both speak Spanish so we were able to connect with a lot of patients who didn’t know what was going on due to a language barrier,” Lopez said.  They were able to explain many socioeconomic issues, such as insurance.  “From my nursing experience, I knew that being hospitalized can be disorienting for anyone, especially an illness that can cause low oxygen levels and added toxins.”

One of Lopez’s patients was frustrated and anxious about his family.  Her bilingual skills served well. In Spanish, she was able to de-escalate his panic attacks and address his medical issues.  “I was able to be there for him in a human way – not just to get him oxygen and medication, but to be present with him, listen to him, and affirm his thoughts and feelings.”

Martinez took a more “boots-on-the-ground” approach to assist two patients and received The DAISY Award® for Extraordinary Nurses from the Army Corps of Engineers for her effort.  She found out that one of her patients had a sister who also was hospitalized but at a different hospital and they had lost contact with each other.  Martinez figured out that both sisters were recovering at the Javits Center and set out to find her patient’s sister.

“The field hospital registration system is different from a regular hospital system.  I had to look through each record by initials.  She was the last patient I researched,” Martinez said.  “When I told her that I was caring for her sister, she literally got up and ran to her sister’s room.” 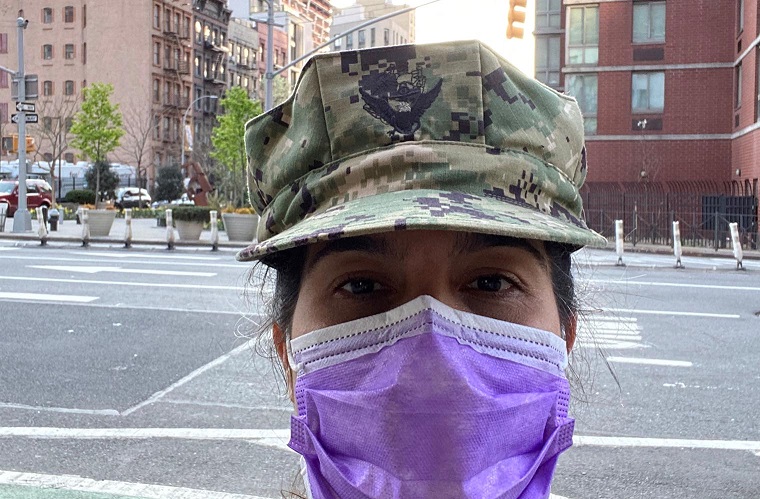 Christina Martinez on the empty streets of New York City.

Martinez arranged for the siblings to be placed together and her team made a promise to not separate the sisters.

“It was so amazing to find the sisters,” Martinez added.  “It helped me to bring some peace into such a crazy environment.”

Martinez received The DAISY Award virtually in front of the Admiral in Washington, DC. The accompanying letter recognized her dedication to duty, steadfast work ethics, with the highest standard of care for her unit.

During their time in New York, Martinez and Lopez were housed in a hotel about four blocks from the Javits Center.  After a couple of weeks, when things calmed down some, they were able to take walks by the water and find ways to relax.  Martinez had a book of puzzles, talked to family, meditated and focused on things that made her happy.  Lopez especially enjoyed the New Yorkers’ tradition of going to their windows or out on their balconies at 7 p.m. every night to bang pots and pans, and cheer for all medical workers.

On May 11, the two BayCare nurses ended their stay in New York and were sent to Jacksonville to quarantine for two weeks before returning to work.

“It was really commendable to see how much flexibility all the nurses and providers showed with all the various organizations coming together,” Lopez said about the experience.  “It had to be a collaborative effort with different cultures coming together, things continually evolving with staffing, scheduling, resources and process improvements.  It was a moving target.”

Martinez said she came back different.  “I definitely had not been through anything like this before,” she said.  “There is a lot of darkness but also a lot of light to be found.  You felt like you were doing the work of God; that you were there to support our citizens.  It was a humbling experience.”

*The appearance of U.S. Department of Defense (DoD) visual information does not imply or constitute DoD endorsement.