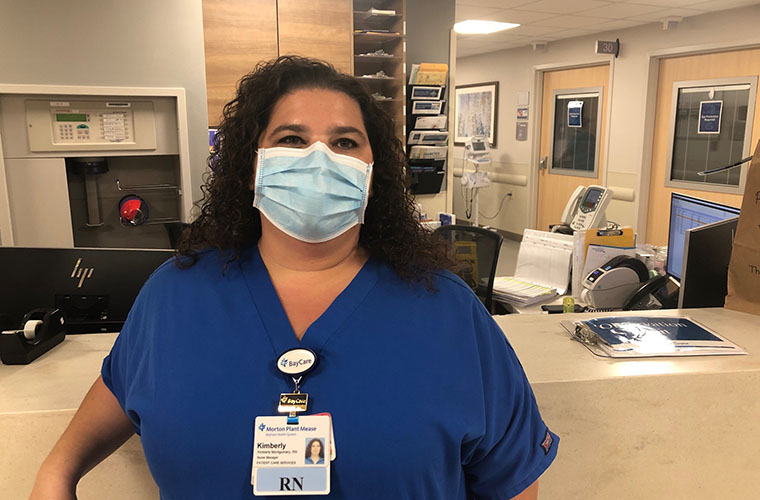 For some people, solving a Rubik’s Cube might be easier than figuring out a career choice. For Kim Montgomery, who oversees the observation unit at Morton Plant North Bay, there was no deliberation. It seems she always was a nurse.

As a little girl when her parents were sick, she attached a bell to the end of a string and ran the string from the bed to the living room – a child’s version of a call bell. She answered it.

“For as long as I can remember, I took care of people,’’ said Kim, who for the past 18 years has been doing that at Morton Plant North Bay Hospital.

That same little girl liked being in charge. Her dream wasn’t to be a nurse; it was to be a nurse manager. That will surprise no one at Morton Plant North Bay.

“She’s very confident. She knows what needs to be done and gives 150% to ensure the needs of her patients and her team are met,’’ said Shannon Hancock, director of patient services.

It took longer than Kim would have liked – 18 years to be exact – but in late May, her dream finally came true when she was named nurse manager of the observation unit, hospital based pool, admissions unit, discharge lounge and Morton Plant Mease core float pool. Nearly 130 people are under her supervision.

“It’s not your typical leadership trajectory, but the different roles she’s had will help her be a great leader,’’ Shannon said. “I’m extremely proud of her. It wasn’t quick, but she wanted it. Her do-whatever-it-takes attitude is refreshing.’’

There were times Kim wasn’t sure she’d get there. Her journey began in 2002 when she landed a job as a patient care tech on the hospital’s second floor. She “was completely ecstatic.’’  A graduate of LPN school, she became a nurse on the same floor six months later.

Then came a succession of roles, each testing her in a different way: nurse in the ICU, Administrator on Duty at night, assistant nurse manager of the observation unit. Under her leadership there, the unit was recognized as the most engaged medium-sized department in the 2018 TMAC survey.

Determined and driven, Kim climbed the educational ladder too, with financial assistance from BayCare. She finished the bridge program to become an RN, earned her BSN and completed the critical care internship program.

“I’m grateful for BayCare; I probably wouldn’t have gone as far if I worked for someone else,’’ Kim said. “All the managers were super supportive and helped guide me in the direction I needed to go. I’m grateful for everyone who took a chance on me.’’

Kim hit the ground running in her new job, starting when evaluations were due. Her unit was turned into a COVID unit, something she hadn’t anticipated. She’s figuring out how to organize herself and help team members she doesn’t see all the time. Mostly, she wants to help team members grow. That aspect was missing in her other roles.

Throughout her journey she’s had the unwavering support of her family. She and husband Dan have 11-year-old and 4-year-old sons and an 8-year-old daughter.

There have been long hours and sacrifices along the way, but Kim never deviated from her path. Once in a while, someone reminds her why.

“That she could remember me years later, and say, ‘You’re so amazing, thank you,’ it makes it all worth it.’’