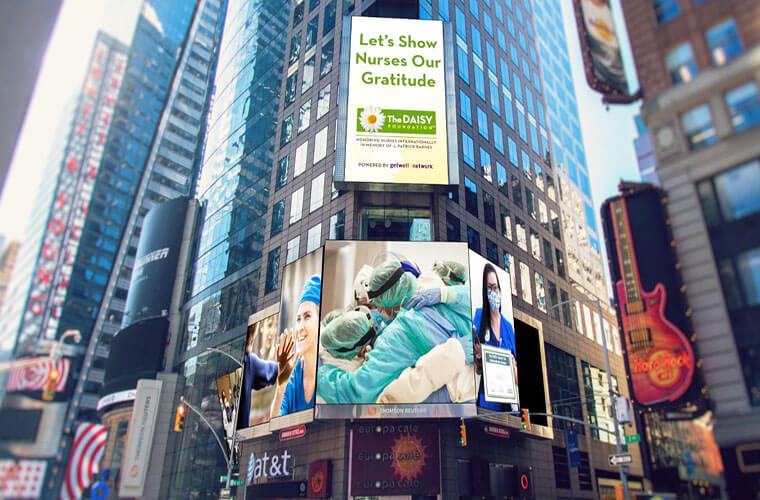 Tori Moore (on the right) is one of the healthcare workers featured in the DAISY Foundation's Times Square display.


Little did Tori Moore know that her crooning abilities would land her on a display in Times Square.

The DAISY Foundation chose Tori, a DAISY Award winner, to be one of the healthcare providers featured in a national awareness campaign designed to thank nurses for their service.

Tori is an Emergency Department nurse at Winter Haven Hospital. She earned a DAISY Award in March 2020, just as the pandemic began to impact the state of Florida. Tori was nominated by a fellow team member who observed Tori’s care for a patient with Alzheimer’s disease. Tori recognized the patient was having a stroke and began treatment promptly.

“It was near the end of my shift, and my patient was confused,” Tori recalled. “She could not stay still and I tried everything to keep her calm. Finally, I began singing Frank Sinatra songs to her and it calmed her down. I probably sang to her for two hours and it was enough to distract her from playing with her dressings.”

Tori said she was inspired to become a nurse when both her grandparents received cancer treatments at Winter Haven Hospital. At the time, Tori was considering becoming a physician assistant.

“I saw the way the nurses cared for my grandfather as his condition worsened, and it made me want to be that person to patients. In this COVID era, it’s that much more important to be that support for patients. It’s very satisfying.”

The DAISY Foundation was created by a family moved by the compassionate care received by a family member in 1999 and wanted to find a way to thank nurses. The foundation partners with more than 4,600 healthcare facilities to acknowledge nurses. To date, more than 200 nurses have been nominated. With the campaign, the foundation hopes to further highlight the sacrifice of nurses during the pandemic. Earlier this month, the Times Square display went live, with Tori’s image among those with a message encouraging viewers to show gratitude to health care workers.

“It’s just a huge honor to represent Winter Haven Hospital and BayCare in this way,” Tori said. “It means a lot to me. I always say the two best things I did in my life was becoming a mom and becoming a nurse.”