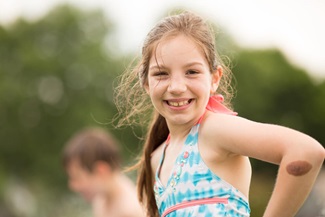 Almost everyone has at least one birthmark—those patches of skin that look different from the rest, which can be present at birth or show up soon after. Some are more noticeable than others, depending on the type of birthmark and where they are on the body.

There are two main types of birthmarks: pigmented, which means that the skin has extra cells that make the skin’s color, and vascular, or birthmarks made of extra blood vessels in the skin.

Moles are one of the most well-known pigmented birthmarks. They’re usually brown, though they may have black, pink or red shades, as well. They can be raised or flat, and they may have bumps on the surface and/or hair growing from them. Moles are usually harmless, though you should watch for any changes to their color, shape, size or borders.

Café au lait spots are very common, with as many as 30 percent of people having at least one. These are light brown in color, flat and typically either round or oval in shape. These birthmarks often become darker when they are exposed to sunlight, just as the skin around them may develop a suntan. They are almost always harmless, but if your child has a café au lait spot bigger than his or her hand, more than five spots on their body, or spots in the groin and/or armpits, then you should mention it to your pediatrician.

Dermal melanocytosis, which used to be called “Mongolian spots,” are the most common birthmark on people of color. They can have a mix of colors—usually brown, black, gray and/or blue—because they can develop in more than one layer of skin at a time. Most of these spots fade and disappear within a few years.

Nevus simplex birthmarks are sometimes called “stork bites,” “angel kisses” or “salmon patches.” These are flat birthmarks that are either pink or red, made of capillaries (tiny blood vessels). About 80 percent of babies have these at birth, often on their faces, but they almost always go away in a few years

Port wine stains are a darker red than stork bites and often larger. These don’t go away as your child gets older, and they may actually get larger and darker as time goes on. If your child is self-conscious about a port wine stain, you can talk to your pediatrician about ways to make them lighter and less noticeable.

Hemangiomas are raised patches of extra blood vessels in the skin. They may look blue or purple if they’re in a deeper layer of the skin, or they can appear as bright red “strawberry marks” near the skin’s surface. These can grow alarmingly fast in young babies, so your pediatrician will want to keep an eye on them. Most of the time they fade and either shrink or disappear over time, but some require treatment if they get very large.