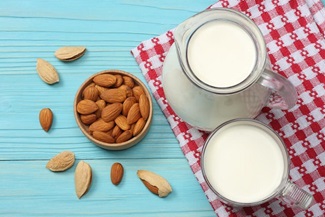 Have you checked out the dairy case at the grocery store lately? It almost seems like cows have been replaced—nut milks have taken over, with new varieties available all the time. So, how healthy are these milk alternatives, really? Whether you’re lactose intolerant, allergic to dairy or just curious to learn more about all the new options, here’s a look at how the different nut milks stack up.

Ah, that trailblazer of nut milks. Almond milk was the first to go mainstream, and with its smooth, silky texture and deliciously nutty taste, it’s no wonder that nut milks caught on. Like most nut milks, the almond variety is low in calories and fat. It also seems to be a good source of prebiotics—the stuff that probiotics feed on.

With an intense, almost sour taste, cashew milk isn’t the best choice for those who want to pretend they’re drinking actual milk (it’s even more potent when added to coffee). It does have a nice, thick and creamy texture that goes great in smoothies. The biggest benefit that cashew milk has over other nut milks is that it doesn’t have to be strained as much, which means that more of the nutrients stay in the milk.

It may make for a popular flavor for creamer, but hazelnut milk doesn’t provide that same strong flavor in your morning joe. It’s still really tasty, though, especially the aftertaste—making this a great choice for adding to cereal or even drinking on its own.

If you’re looking for a sweet, nutty flavor to perk up your morning oatmeal or after-dinner coffee, then coconut milk is a delicious and nutritious choice. Unlike many nut milks, coconut milk retains quite a lot of the nutrients found in the coconut, including:

Things to keep in mind

The thing about nut milks is that they’re basically ground-up nuts mixed with water and then strained—the majority of the fiber, protein, vitamins and minerals are strained out of the liquid right along with the nut pulp. And, while most commercially available nut milks do have nutrients added back in, many also come loaded with added sugars, salt, thickeners and other junk that doesn’t add to the “health food” appeal.