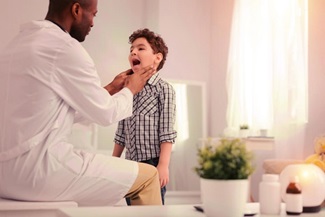 You’ve heard of tonsils—mostly in the context of them getting infected and maybe even removed. But what are tonsils (hint: it’s not that dangly thing in the back of your mouth) – and what are they for?

If you still have your tonsils, you can see them pretty easily if you open your mouth and keep the back of your tongue flat. Look in the very back, to either side of the dangly thing (it’s called the uvula, by the way) and you should see two oval-shaped pieces of tissue. These are your tonsils. Note: If you have trouble with your tongue getting in the way, try saying “Ah” like the doctor tells you.

Why do we have tonsils?

They may just look like lumps of extra tissue in the throat, but tonsils aren’t made up of the same stuff as your tongue or the inside of your cheeks—they are actually lymph organs. They have a few jobs:

Why do people have their tonsils taken out?

There are two main reasons that doctors may recommend surgery to remove the tonsils (called a tonsillectomy).

It used to be really common for kids and teens to have their tonsils removed, usually because of repeated infections (tonsillitis). Now that we’ve learned more about how tonsils work, most doctors try to avoid removing them unless the infections can’t be stopped with other treatments.

Sometimes, doctors may recommend tonsillectomies because the tonsils are unusually large and may cause problems with breathing or swallowing. At night, large tonsils may partially block the airway and cause snoring, or they may totally block the airway and cause the person to stop breathing for short periods—a condition called obstructive sleep apnea.