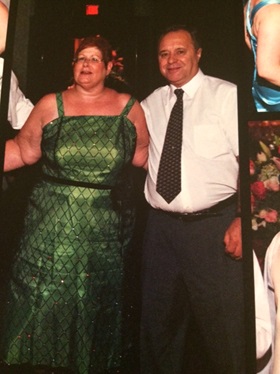 From Rags to Riches: My Weight Loss Surgery Cinderella Story

I would like to begin by telling you some things about myself. My name is Nancy O’Leary, and I am currently of the age at which I should be relaxing. For me, nope! No moss grows under my feet — at least not anymore! I have two brothers and a sister, but none of them live in Florida. I have seven wonderful grandchildren and one is local. I am the treasurer of my church, on the church council, and I am very active in raising funds for breast cancer. I am blessed to be able to proclaim that I am a 14-year cancer survivor.

I moved to Florida six years ago, when I weighed 275 pounds. I have always struggled with my weight, which constantly fluctuated up and down — unfortunately, mostly up. I am the middle child, and the only one with weight issues in my family. I have always felt responsible for my siblings, always the one to lend an ear. While they shared their problems with me, I began to eat my way through mine. The year after we moved to Florida, a friend told me she had bariatric surgery. We talked on the phone about her journey, and she told me that weight loss surgery wasn’t a cure, but a tool to help her meet her health goals. Soon after, at a routine check-up with my doctor, I found out that I had become prediabetic. I began to fear that although I had survived cancer, I still may never get a chance to see my golden years with my declining health. I spoke to my sister who is a nurse, and told her I was considering weight loss surgery. Was this truly something that I could do to save my health? I could hardly believe the words as they were coming out of my mouth, but by the end of that phone call I decided to move forward. It was now or never. Being a relatively new Florida resident, I had no idea how to navigate the health care system. I didn’t know which hospitals or surgeons were good and which were not. Although I would not recommend choosing a surgeon from a picture in an ad, that’s exactly what I did! I saw a picture of Dr. Small in the newspaper and thought to myself, “I don’t know if he is a good surgeon or not, but at least he’s cute!”

I attended his weight loss surgery seminar and once I got home I told my husband what I learned that evening. Although he was initially reluctant, he soon changed his mind when I told him I was afraid I would die if I continued to walk the path I was on, and that I believed that the surgery was an answer to my prayers from God for better health. Even though I had made my mind up to proceed with the surgery, the week before my scheduled date, I actually gained weight! I’m not sure why Dr. Small agreed to move forward (he usually doesn’t if there is weight gain), but thankfully he did. Although he may not have known it, that single decision on his part changed everything for me.

The surgery went well, and the weight started to come off. Once my diet progressed from liquids to firmer foods, I took the advice of the Dunedin bariatric surgery team and went to my FIRST Overeaters Anonymous (OA) meeting. I knew that if I didn’t work on my weight problem on the inside, I could never be successful for a lifetime on the outside. I was determined not to allow history to repeat itself. I never liked myself when I was overweight. I never liked being the odd one out, and let’s not even talk about donning a bathing suit to go to the beach as a young girl. Those memories were very painful. What I learned in OA and the Dunedin support group was paramount to my success. I learned that I was important and that I needed to come first. No one can truly help others when they themselves are drowning! One of the steps to recovery required of me in OA was to make amends with others who may have been hurt by my food addiction. I spoke to my family and I told them I was sorry if my weight ever caused them any embarrassment. I then told them that although I loved them and I would always be there for them, I needed to put my own needs first so that I could recover. I told them that I would continue to listen to their problems, but it was up to them to make the changes they needed to make to work through their problems on their own. I could not and would not take on that responsibility any longer. 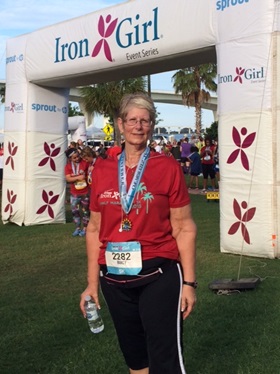 After I began to work on my inside, I started to focus a bit more on the outside. I started with walking short distances. Gradually the distances grew longer. About a year after my surgery, a neighbor of mine who was an avid runner asked me if I would run with her. I laughed out loud! Didn’t she know that I was a couch potato who finally started walking not so long ago? I thought about her words, and wondered why she thought that I had the ability to run. Then it came to me; if she had faith in me, why didn’t I have faith in myself? Knowing that there would be no one to see me run (and possibly make a fool of myself), I thought, “what the heck! I might as well give it a shot! Iron Girl, here I come!” My first 5K race went from thought to reality.

For me, the 5K was more of a walk than a run, but the sense of pride I felt when I crossed finish line was so overwhelming! Overcome with emotion, I cried as I crossed that finish line and received my medal. Little did I know that I was hooked. Since then, I have completed three Iron Girl 5Ks, three Gasparillas, and I have walked in a two-day, 35-mile walk for breast cancer for three years. This year I even conned my husband into doing the 5K Ice Cream Sundae Run. Who wouldn’t run for ice cream? I know the struggles we all have in life, and how easy it is to allow our struggles to take us away from the joy of just being able to get up and move each morning. I also know how easy it can be to slip back into my old habits. I have learned to focus on the positives in my life as opposed to the negatives, which we all have.

Each day I remind myself how blessed I am to have been given this gift of a second chance to really live. I may have wasted 53 years of moments by being blind to those that God put right in front of me, but I refuse to waste one more moment! In February, my dream will come true as I run in the Walt Disney World 5K Princess Run. This will be my crowning moment, because I finally feel like a queen!