Veteran Nurse Takes Control of Her Health After Heart Attack 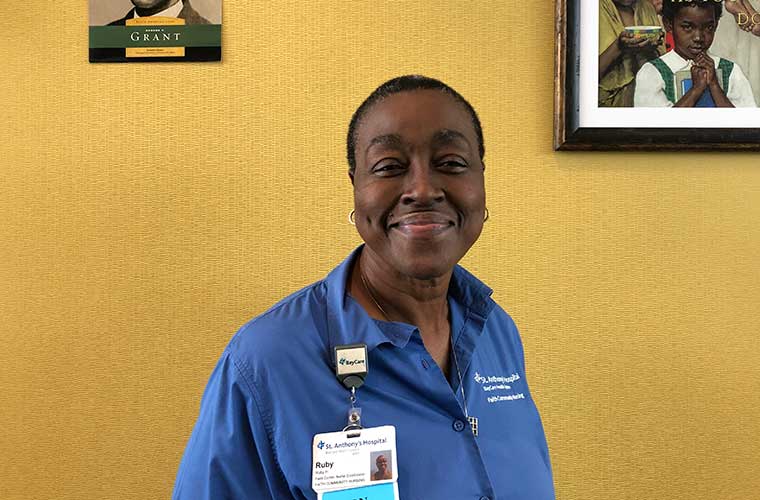 Ruby Hope, a Faith Community Nurse at St. Anthony’s Hospital, changed her lifestyle after suffering a heart attack in 2014. Today, she exercises and watches what she eats.

Ruby Hope has been a registered nurse for 41 years. She’s cared for patients, her family and even friends. But she hasn’t always taken good care of herself.

“As a young nurse, I would eat anything so I could get back to work,” said Hope, who has worked for about three years as a Faith Community Nurse at St. Anthony’s Hospital, a part of the BayCare Health System. “I was suffering from diabetes and taking medication but not really living a healthy lifestyle. I would exercise sporadically. And I would definitely eat anything I wanted.”

She raised awareness about heart disease health issues through her sorority and church. But she never took her own heart health seriously even as she suffered with several chronic illnesses – hypertension, diabetes, kidney disease and heart disease. Although she had a family history of heart disease – her mother was 60 and her brother was 56 when they died from heart attacks – Hope wasn’t concerned about her risk.

Hope is sharing her story during Heart Month, the annual observance in February to bring light to issues of the heart and cardiac health. She hopes that the changes she made will resonate with others.

She was diagnosed with coronary artery disease and began taking medication. Even after the diagnosis, she remained more focused on her diabetes.

Hope’s health took a drastic turn when she needed a kidney transplant in 2012. But she couldn’t be considered for the transplant because she was overweight. She began eating healthier and exercising. She lost weight and her kidney function improved. By 2013, she no longer needed the transplant.

Even as her health began to improve, she began to experience shortness of breath while walking. She couldn’t walk up steps without getting winded. In May 2014, Hope was out for a walk in her neighborhood. “All of a sudden, I had this overwhelming sense of doom,” Hope said. “I began to feel a sharp pain in my left hand. I called my husband to come and pick me up.”

Instead of heading to the emergency room, Hope headed for her couch. “I was feeling better and just felt that I would be okay after a good night’s sleep,” she said. “I didn’t listen to my body and that was a big mistake.”

She had an appointment with her doctor the next day and told the nurse practitioner what happened. She immediately wanted to bring the doctor in to see Hope. “He told me to call my husband and tell him to bring my lipstick,” she said. “He said I was having a heart attack.” 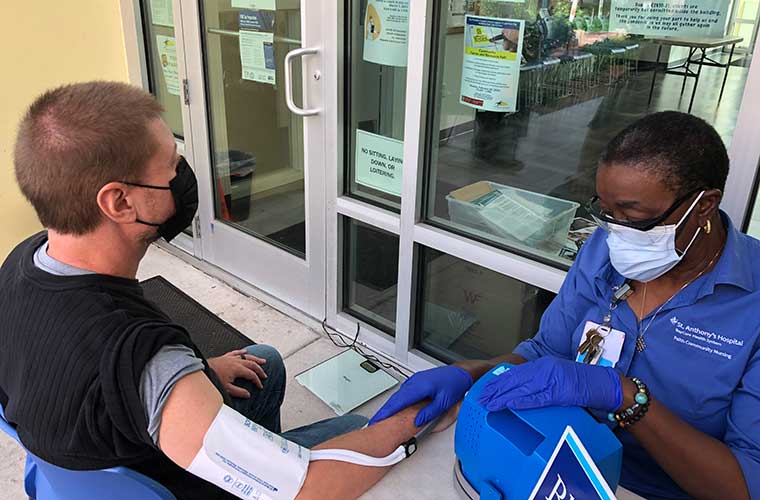 Hope, who has been with St. Anthony’s Hospital for nearly three years, takes the blood pressure of Matt Korol, the director of operations at Daystar Life Center. Twice a week, she takes blood pressures for Daystar employees and visitors at the community organization.

The heart attack was a wakeup call for Hope. She began to take her health seriously. She had heart bypass surgery to correct four coronary blockages at Morton Plant Hospital and then she went into cardiac rehabilitation. She changed her diet. She participated in BayCare’s Diabetes Empowerment Education Program (DEEP) which encourages small lifestyle changes while providing education about diabetes and the way it affects your health.

She began to exercise including cardio in her regular routine. She enjoyed walking with her family. And she learned about the numbers that play an important role in her health.

“Knowledge is power,” Hope said. “You should know your family history. And you should know and manage your personal health numbers,” she said. “By having that information, you can take action to save your life.”

Brian Moss, DO, a cardiologist at Bay Area Heart Center in St. Petersburg since 2008, says that Hope is correct about knowing your numbers. “Whether it is blood pressure, A1c or weight, knowing your numbers can help you become an active participant in your own health care,” said Dr. Moss who also serves as director of the echocardiography department at St. Anthony’s Hospital. “All numbers discussed between you and your doctor are modifiable. This means you can change your numbers, and therefore your risk, by making lifestyle changes – whether it’s losing weight or lowering your blood pressure. The numbers are a good indicator to show you that you are on the right track.”

Dr. Moss also advises his patients and co-workers to move more and eat better to lower the risk of heart disease. He said that Hope is doing the right things to take control of her health.

Today, Hope, 62, spends two days each week taking blood pressures for visitors to Daystar Life Center, a facility that helps to fight hunger, poverty and homelessness. Her work there is made possible by BayCare’s Community Health Needs Assessment (CHNA) funds at St. Anthony’s. (The 2022 CHNA survey has launched. Everyone in the four-county area of Hillsborough, Pasco, Pinellas and Polk counties is invited to take the survey here.

She says she feels much better than she did in 2014 although she still is dealing with those same four chronic illnesses and eating right is a struggle. She says it’s important not to ignore warning signals.

“I went home and sat on my couch instead of going to the emergency room. That was the wrong thing to do,” she said. “You have to face it to fix it. We take care of our loved ones but we should take care of ourselves too.”