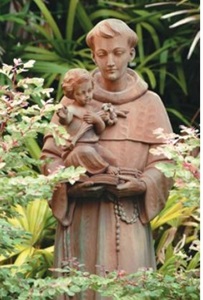 Celebrate the Feast of St. Anthony, Patron of our Hospital, June 13

"Anthony, Anthony, Look Around
Something's Lost and Can't Be Found!"

The Patron Saint of our hospital is this same Saint Anthony. St. Anthony (1195 - 1231) was born in Lisbon, Portugal. At age 15, he entered the religious order of St. Augustine but later transferred to the Franciscan Order after being inspired by Franciscan Missionaries.

Anthony was well known for his ability to deliver charismatic sermons. Thousands of people would come to hear him in the marketplace and open fields because the churches could not hold them. His sermons calling others to charity were so successful that he was known as "Friend of the Poor."  He traveled throughout Italy and France preaching peace, forgiveness and faithfulness to God.

Despite Anthony’s efforts, not everyone listened to him. Legend has it that one day, faced with deaf ears, Anthony went to the river and preached to the fishes. They held their heads up out of the water, and looked attentively at the face of Anthony as he spoke. The people, seeing the reaction of the fish, were suddenly drawn to the river to hear his sermon for themselves. They were imitating the fish in their desire to hear Anthony’s message of the gospel.

Anthony's last years were spent in and around Padua. His greatness was recognized as the Church made him a saint and named him a Doctor of the Church.

So how did St. Anthony become known for finding things?  Well, the story goes that someone stole a book from Anthony. Anthony prayed that it would be returned. God heard Anthony's prayer and touched the heart of the thief who was ashamed of his action. The thief returned the book.

The Franciscan Sisters of Allegany pray that God will restore to you the important things that you may have lost along life's way: love, energy, health, good relationships, or faith.  We ask that as members of this great hospital community, under the protection of St. Anthony, you may find greatness, peace and joy in your service to the sick and poor.