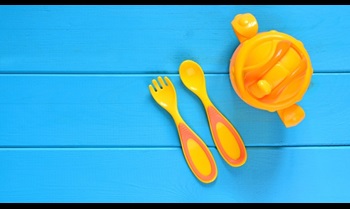 Is your 12-month-old getting the hang of feeding himself with his fingers? Sure, he’s almost certainly dropping some tasty morsels into his lap, onto the floor, and occasionally on the wall, but he probably has the basics of self-feeding down. If so, he may be ready to experiment with a spoon or fork!

Once he’s ready to start holding utensils on his own, you’ll want to put away the baby spoons. Look for toddler utensils with chunky handles and rounded edges. These are easier for babies to hold, gentler on tender gums and safer for baby’s eyes (and yours).

If your child has been learning his way through self-feeding up until now, you may want to let him figure things out for himself. In that case, you can just start putting a spoon or fork on your little one’s tray next to his plate or bowl. He may not know quite what to do with them at first, so you might want to “pre-load” the utensil with a bit of food and see what he does with it.

If baby-led feeding isn’t for you (or if you don’t want to deal with the inevitable messes that result), you can start more slowly. Go with a thick food like oatmeal or mashed potatoes in a bowl, giving your child one spoon while you hold another. Feed him with your spoon like usual, while letting him play around with the other one. Before long, he’ll start dipping his own spoon into the food and “helping.” You can also place your hand over his and guide his spoon into the food, and then back to his mouth.

If you don’t plan to be right there holding the plate or bowl, consider not even using one. Placing food directly on the highchair tray will give your baby more freedom to explore his dinner and cut down on the number of projectiles and the amount of food he can launch when he gets frustrated or bored.

However you choose to introduce utensils, be your baby’s biggest fan while he works on learning this important new skill. And, instead of thinking about the mess he’s making, think about how nice it will be to have an independent eater in the near future!