By 2019, BayCare had climbed from a national ranking that was in the middle of the pack to a position in the top 20 percent of large health systems in the nation, based on measures used by IBM Watson Health. In 2020, BayCare repeated that achievement, remaining in the top 20 percent. IBM Watson Health evaluates hospitals and health systems using publicly reported data on clinical and patient satisfaction metrics. Health systems can’t apply for the awards.

Also in 2020, St. Joseph’s Hospitals were named to IBM Watson’s 100 Top Hospitals list for the third consecutive year. Morton Plant, Mease Countryside and Mease Dunedin hospitals were ranked in the top 10 percent of U.S. hospitals and South Florida Baptist Hospital was in the top 15 percent. St. Joseph’s Hospital was named one of the 50 Top Cardiovascular Hospitals by FORTUNE and IBM Watson Health. The American Heart Association recognized BayCare hospitals for achieving outstanding quality measures when treating heart attacks and strokes. And nine BayCare hospitals received “A” grades and two received “B” grades from The Leapfrog Group, which recognizes U.S. health care facilities that prioritize patient safety. 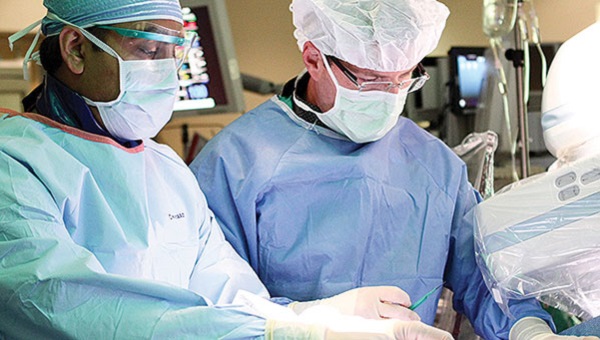 Alok Singh, MD, (left) and Andrew Sherman, MD, collaborate on a cardiac procedure at BayCare’s St. Joseph’s Hospital, which was named one of the 50 Top Cardiovascular Hospitals in the U.S. in 2020.

In addition, 10 BayCare locations received national awards from Press Ganey, a company that surveys patients on their satisfaction with the service or treatment they received from a health care facility.

“I’m extremely proud to work with such talented team members and physicians,” said Laura Arline, MD, vice president and chief quality officer for BayCare. “Every person in this organization has contributed to BayCare’s high achievement in quality and safety— whether or not they provide direct patient care. We’ve shown that when we all work as a cohesive team toward a singular goal of providing the patients in our community with the very best care possible, we can accomplish anything.”