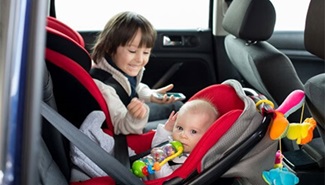 The American Academy of Pediatrics has long advised parents to use rear-facing car seats for as long as possible, with the most recent guideline recommending waiting until at least age 2, and even later if the weight limit allows it. It’s true that rear-facing models are less convenient and prevent much interaction on the drive, but the safety statistics more than make up for minor annoyances.

Studies show that children under age 2 are 75 percent less likely to suffer severe or fatal injuries in a car crash if they’re secured in a rear-facing seat. This is because when a car crashes, the momentum keeps the people inside traveling forward at the same rate of speed, even though the car itself has stopped. A child in a rear-facing seat has nowhere to go, because their head, neck and spine are fully supported against the back of the seat. In contrast, a child in a forward-facing seat is only held in place by the straps, which do nothing to support the head and neck.

Size matters (or does it?)

When it comes to car seat safety, it’s more about the child’s weight than their height. You may find that your child’s legs are so long that they push against the vehicle seat, but that’s okay. Just pay attention to the weight limit listed on the seat to make sure your child stays safe.

When it’s time to switch

When it does come time to turn your child around, make sure you’re placing them in a high-quality car seat that includes a tether at the top. This tether keeps the back of the seat in place, so that it doesn’t get thrown forward in a crash.